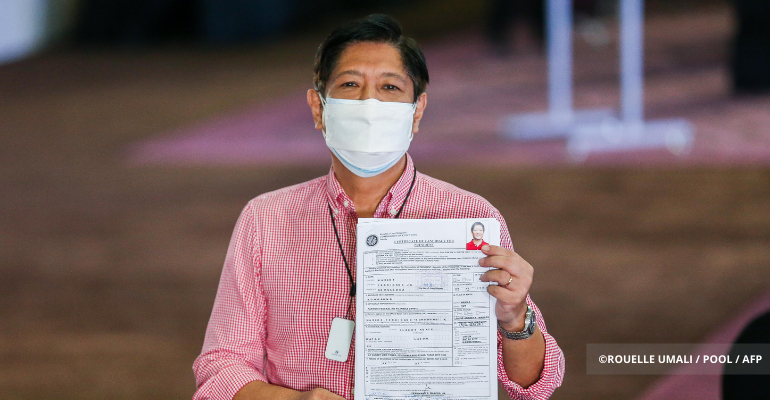 Get to know BBM (Bongbong Marcos) before elections 2022: his background, educational and political achievements, and other details.

The May 9, 2022 elections are just a few weeks away. It is high time that we get to know our candidates so we can choose the right people to take the highest positions in our country. The Know Your Elections 2022 Candidate is a series of blogs containing fact-based information from the candidates’ official websites and other credible sources.

Bongbong Marcos is the presidential aspirant of the UniTeam tandem, with Mayor Sara Duterte as his running partner during the elections 2022. Below are his personal, educational, and political details.

Born on September 13, 1957, in Manila, Philippines, Bongbong Marcos is the only son of former president Ferdinand Marcos Sr. and Imelda Marcos. He married Louise Araneta on April 17, 1993, and have three children: Ferdinand Alexander, Joseph Simon, and William Vincent.

After finishing his secondary education in Worth School, England, Bongbong Marcos proceeded to Oxford University. There, he studied and attained a Special Diploma in Social Studies in 1978. The following year, he took a Graduate Coursework in Business Administration in the Wharton School of Business at the University of Pennsylvania, USA, until 1981.

After returning to the Philippines, he became the Vice-Governor of his hometown Ilocos Norte from 1981 to 1983. The following is his service record until recent years.

All in all, he has served several positions in both the legislative and executive branches of the government. He served three years as a Vice-Governor, 12 years as a Governor, six years as a Congressman, and six years as a Senator.

Below is the list of committees he was a part of:

Below is the list of Oversight Committees he was a member of:

BBM has been politically affiliated with the Kilusang Bagong Lipunan from 1980 to 2009, the Nacionalista Party from 2009 to 2021, and the Partido Federal ng Pilipinas (PFP) from 2021 to present.

In his time as Governor of Ilocos Norte, BBM was able to transform it into a first-class province. He was also able to capitalize on the strength of its land and the people, thereby creating new and modern opportunities for development. During his term, BBM built wind farms around the province to serve as energy supply there and the rest of Luzon. Ilocos Norte also became an agricultural exporter and tourism hotspot under his guidance.

Find out more about his accomplishments as governor here.

Another law highlighted on his website (bongbongmarcos.com) is the Philippine Archipelagic Baseline Law (RA 9522) which he authored. This legislation defines what constitutes the Philippine territorial sea, which is helpful in terms of international disputes.

The following are some of the laws he took part in in the making:

After he filed his candidacy for the presidency in October 2021, there were many who filed for BBM’s disqualification. The first one to file was Danilo Lihaylihay on October 11, 2021.

The petition argued that Marcos should be disqualified for having misrepresented his eligibility in his certificate of candidacy, as having been convicted of “a crime which carries a penalty of perpetual disqualification from public office and for his repeated violations of the NIRC (National Internal Revenue Code) and his continued evasion/non-payment of taxes renders his conviction as one involving moral turpitude.”

However, upon the Consolidated Answer of the BBM on November 16, 2020, the COMELEC dismissed the Danilo Lihaylihay v. BBM petition on December 16, 2020. Comelec’s Second Division denied the petition saying Lihaylihay’s evidence is “grossly insufficient considering that the COC it sought to cancel was not even attached to the petition.”

Furthermore, there were other petitions filed for the disqualification of Bongbong Marcos in his run for the presidency. But, the consolidated cases (Bonifacio Ilagan, et al. vs BBM, Akbayan Citizens, et al. vs BBM, Abubakar Mangelen vs BBM) were all dismissed just recently by COMELEC on February 10, 2022.

Non-attendance in debates and interviews

Another trending topic that revolved around BBM is his non-attendance in some debates and interviews all presidential candidates are invited to.

He made appearances in interviews with the ALC media group, One PH, DZRH, popular TV host Korina Sanchez, and entertainment host Boy Abunda. However, he declined the interview with the host and journalist Jessica Soho, as well as Kapisanan ng mga Brodkaster ng Pilipinas (KBP) forum. The latter is due to conflict of schedule, and the former is due to Marcos accusing the veteran journalist of being ‘biased.’

When it comes to debates, Bongbong Marcos has thus far joined the SMNI debates on February 15. SMNI is a news channel owned by Pastor Apollo Quiboloy, who is a wanted suspect by the FBI in the United States. The UniTeam presidential aspirant declined the recent CNN Philippines debate held last February 27, 2022, at the University of Sto. Tomas due to conflict of schedule.

Meanwhile, COMELEC reports that all presidential candidates will be joining the COMELEC presidential debate on March 19, 2022. However, following the announcement, Vic Rodriguez (Marcos’ spokesman) said although BBM is ready to participate, his attendance “will only be confirmed if his hectic campaign schedules permit.”