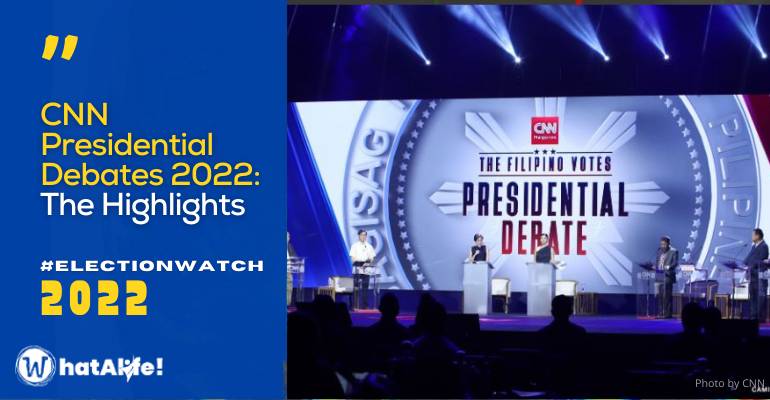 You need to look for various qualities in a President. First, however, one must see if their chosen candidate can hold their own in a debate with other aspirants. Last weekend, candidates gathered for a round of debates. First, vice-Presidential debates were held on Saturday, February 26. Then, the Presidential debates were held on Sunday the 27th.

Of course, the number of aspirants is at a “manageable” number, so January’s teaser debates got scrapped. The debates for February, March, and April continue as scheduled. The first set of discussions from February 26 and 27 offer new insights into our candidates.

The highlights of the CNN Presidential Debates 2022:

Marcos (and Duterte) absent, but not unnoticed

While the candidates attended their respective debates, the Marcos-Duterte Tandem skipped out on this one. Specifically, Senator Ferdinand “Bongbong” Marcos couldn’t participate due to scheduling conflicts.

Though a shame, all attending aspirants felt the tandem’s absence, with some even commenting on it. One of the commenters was Current Vice President Leonor “Leni” Robredo, despite not mentioning Senator Marcos by name. Even Labor Leader Leody de Guzman and Manila Mayor Isko Moreno chipped in their two centavos each.

Indeed, Senator Marcos does not attend many debates compared to other candidates. Thus, he can’t answer the issues others may have against him. Robredo says, “[Y]ou shouldn’t hide from them. That’s why for me, this is about giving value and respect to the people who would [elect] you.”

Thoughts on labor and workers’ rights

Labor Leader Leody de Guzman and Dr. Jose Montemayor, Jr. went head-to-head over labor policies. The heated debate-within-a-debate was spurred on by the topic of the ideal minimum wage.

Dr. Montemayor asked if de Guzman was thinking of the employers when the latter answered that his ideal minimum wage was ₱750. (Senator Pacquiao answered ₱700-800.) Dr. Montemayor stated that such a wage is like “biting the hand that feeds.” Leody de Guzman replied that he does think of the employers. However, he emphasized that workers and laborers need dignified salaries “and not be given bits just like slaves.”

Leody de Guzman went on to ask if they were to make workers’ lives harder by merely giving them a “slavery wage.” He added that they must pay workers what they’re owed, as they are responsible for the Philippines’ development. Also, de Guzman said that they must not simply praise workers only on Labor Day and then let them go back to their meager wages for the rest of the year.

Dr. Montemayor tried to ask more questions, but moderators stated that de Guzman had already given him an answer.

The consensus on LGBTQ+ and same-sex unions

During the debate, Senator Manny Pacquiao was uncompromising in his stance against LGBTQ+ people. The former boxing star has opposed the queer community’s rights for a while. Senator Pacquiao stated he had “high respect” for the community. However, he did not distinguish between same-sex civil unions and same-sex marriage and thus opposed both. In addition, the Senator also opposed divorce. His stumbling on these topics caused his performance in the debate to suffer.

However, Senator Panfilo Lacson and current Vice-President Leni Robredo accepted civil unions. However, same-sex marriage is still a ‘no’ for them.

While citizens wanted to see how their bets planned their presidential reign, a DDoS attack made CNN Philippines’ site inaccessible for over two hours. This incident comes after the House of Representatives was called to investigate the frequent disproportionate cyberattacks on news outlets.

CNN PH was the victim of another cyberattack on February 27. Around 7:30 PM, the news outlet went to its social media channels to state that the website had undergone a Distributed Denial of Service attack. Of course, CNN PH did their best to get the site back to normal. Still, the website returned at 9:45 PM.

This isn’t the first time a news outlet has been subjected to such a thing, though it is the latest. Other news and media outlets have had to deal with cyber attacks as of late. Some examples of the victims include ABS-CBN, Rappler, and Philstar.

Have you chosen your President yet?

And that’s it for the top highlights of the CNN Philippines 2022 Presidential debates! Of course, many have shared more of their presidential platforms and plans should they be elected for the coveted position. Still, the country has a say on who gets to lead them.

Another round of debates, this time hosted by COMELEC, is slated for March 19. As such, all Presidential Candidates are to participate, the poll body announced. – WhatALife!