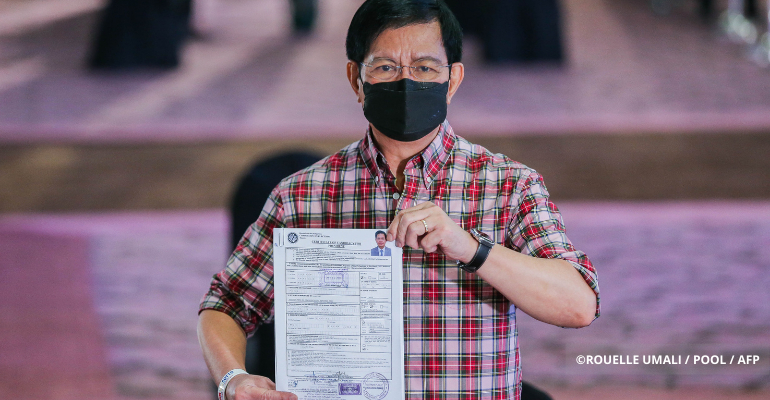 Get to know Ping Lacson before elections 2022; his background, educational and political achievements, and other details.

The May 9 elections are just a few weeks away. It is high time that we get to know our candidates so we can choose the right people to take the highest positions in our country. The Know Your Elections 2022 Candidate is a series of blogs containing fact-based information from the candidates’ official websites and other credible sources.

Ping Lacson is the presidential aspirant of the Lacson-Sotto tandem, with Senator Vicente “Tito” Sotto III as his running partner for elections 2022. Below are his personal, educational, and political details.

Ping Lacson was born on June 1, 1948, in Imus, Cavite. He is married to Alice de Perio with 4 children: Reginald, Ronald Jay, Panfilo Jr., and Jeric.

Lacson finished his education and training in the Philippine Military Academy in 1971. He then proceeded with a master’s degree in Government Management in the Pamantasan ng Lungson ng Maynila from 1995 to 1996.

Other than his Bachelor of Science Degree in the PMA, the following are the courses he took during his police/military training:

Before his time as a senator, Ping Lacson served in the military. Below marks each of his military and non-political position from 1971 to 2015.

During his term as PNP Chief, Lacon was able to raise the public approval rating of PNP – the highest in its history. He commenced the “no-take” policy and a fitness program in the public organization. The latter required a 34-inch waistline limit for police officers.

He gave 85% of the PNP resources to the frontline units and cleansed the police of “scalawags in uniform” or kotong cops.

Through these initiatives and by handling high-profile crimes such as kidnap-for-ransom cases, Lacson managed to revive the reputation of the Philippine National Police from 1999 to 2001.

Lacson began his political career when he became a senator from 2001 to 2013. Then from 2013 to 2015, he became the Presidential Assistant on Rehabilitation and Recovery. After his term, he ran again for a senatorial spot in 2016 and won. At present, he is a senator running for the highest post of the country during the elections 2022 – president.

In his time as Presidential Assistant for Rehabilitation and Recovery, his forefront contribution was helping the victims of Super Typhoon Yolanda (international name ‘Haiyan’).

He and his staff established the Yolanda Comprehensive Rehabilitation and Recovery Plan (CRRP). It detailed “institutional arrangements, including public-private partnerships; and cluster structures for infrastructure, social services, resettlement, livelihood, and support.”

The CRRP also contained the rehabilitation and recovery plans for local governments and guidelines on how to engage with the non-government sector.

When he became senator, he was a key person in taking down the multi-billion peso pork barrel system. However, 10 years before the multi-billion peso Priority Development Assistance Funds (PDAF or Pork Barrel) scam, Lacson had already detailed how the public funds were pocketed via PDAF on a privilege speech in March 2003.

Lacson also returned his PHP 200 million-a-year PDAF allocations to the National Treasury, which saved the government with PHP 2.4 billion in 12 years.

During his time as a senator, he authored and sponsored various laws.

Below is the list of laws he is affiliated with:

Below is the list of bills he filed to “curb criminality and corruption”:

Ping Lacson was also a key person in exposing and calling for investigations in various anomalous activities, which includes:

Achievements during the 17th Congress

Ping Lacson is well-known for his battles against the pork barrel scam and related incarnates. During the 17th Congress, he was able to expose billions of “pork insertions” of Congressmen that realigned funds from the proposed 2019 budget. These 95 billion “pork” allocations are part of the appropriations vetoed by PRRD in RA 11260 or the General Appropriations Act of 2019.

Achievements during the 18th Congress

Lacson is the head of the Senate Committee on National Defense and Security and Accounts during the 18th Congress.

Below is the list of senate committees he is vice chairman of:

Below is the list of senate committees he is a member of:

Some of the bills he filed at this time were mentioned in the previous section, including the Anti-Terrorism Act of 2019, the Budget Reform Village Empowerment Act of 2019 and more.

A few others include:

Senator Ping Lacon also boasts numerous medals for his public service. They are listed as follows:

During his 50 years in service, Ping Lacson has been affiliated with various organizations. See the full list below:

During his elections 2022 presidential candidate interview with Jessica Soho last January, Lacson was reminded of his involvement in a murder case that led to him being a fugitive for a year.

Lacson fled the country after the court issued a warrant of arrest against him for the murders of publicist Salvador “Bubby” Dacer and his driver Emmanuel Corbito in November 2000. While in hiding, he was able to plead to stop the arrest orders.

He explained to Jessica Soho that he had a lawyer who “knew the law” and led him to the Miranda vs Tuliao Supreme Court ruling, where people facing warrants of arrest can file pleadings while in hiding.

Lacson also believes that the Dacer-Corbito case was a plot against him by former president Gloria Macapagal-Arroyo, who he accused of corruption.

Lacson’s role during the martial law

Another issue touched during the elections 2022 presidential candidate interview was Ping Lacson’s role during martial law.

He was a member of the Military Intelligence Security Group (MISG) during the reign of former president Ferdinand Marcos Sr. The MISG unit was also known to be behind the torture and disappearance of activists and critics of the dictator.

However, Senator Ping Lacson denied his involvement in the torture of political prisoners. Instead, he said he only worked on common crime cases, including kidnap-for-ransom and robbery. These are cases that were able to help him rise to the top in the Philippine National Police in the following years. – WhatALife!