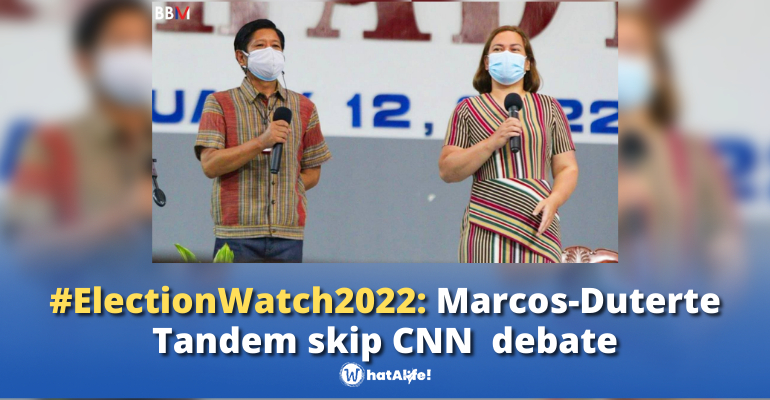 On February 27 (Sunday), CNN will be hosting a national debate for the presidential candidates for elections 2022. Meanwhile, a vice-presidential debate will also commence the previous day, February 26 (Saturday).

Among the ten presidential aspirants, nine accepted the invitation. These are:

Meanwhile, former Senator Ferdinand “Bongbong” Marcos Jr., or BBM to his supporters, will not attend the debate to a conflict of schedule.

Previously, Marcos also denied the invitation to the Jessica Soho Presidential Interviews and Kapisana ng Broadkaster ng Pilipinas Presidential Forum. The main reason for this decision is in line with Marcos’ desire to not attend any forums or debates that will lead to “bickering” with other candidates.

Meanwhile, among the nine vice-presidential candidates, eight will be attending the debate on February 26. These are:

Davao City Mayor Sara Duterte, the running mate of Marcos, will not be attending the event. There are no statements released explaining the decision of her camp. CNN Philippines reported that they sent the invites separately to both Marcos and Duterte.

The debates will be hosted at the University of Santo Tomas from 5pm to 7pm, and can be witnessed in-person or online.

They will air live on CNN Philippines Free TV Channel 9, or the audience can watch the livestream on cnnphilipppines.com or their official Facebook Account. – WhatALife!