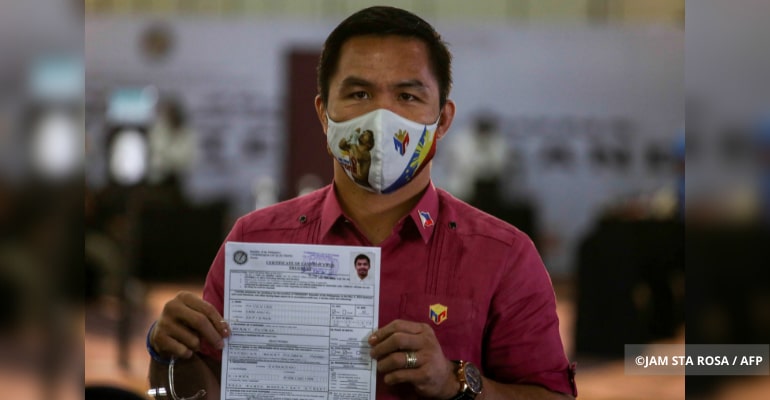 Get to know Senator Manny Pacquiao before elections 2022; his background, educational political achievements, and other details.

Manny Pacquiao is the presidential aspirant of the Pacquiao-Atienza tandem, with Lito Atienza as his running partner during the elections in 2022. Below are his personal, educational, and political details.

Born on December 17, 1978, in Kibawe, Bukidnon province, Mindanao, Philippines, Manny Pacquiao is the son of Rosalio Pacquiao and Dionesia Dapridran-Pacquiao. He married Jinkee Pacquiao on August 10,1999 and they have five children together: Jimuel, Michael, Princess, Quennie, and Israel.

Manny Pacquiao passed a high school equivalency exam in February 2007, allowing him to attend college. Then, he had a 10-day crash course on Development Legislation and Governance, Graduate School of Public and Development Management at the Development Academy of the Philippines, 2010. He later pursued a Bachelor’s Degree in Political Science Majoring in Local Government Administration through the Expanded Tertiary Education Equivalency and Accreditation Program (ETEEAP), Philippine Councilors League-Legislative Academy and graduated in 2019.

Manny Pacquiao left his family as a teenager and boarded a ship to Manila, Philippines, in the hopes of training as a boxer and launching a career in the sport. Soon after, in January 1995, his ambitions gained traction; at the age of 16, he stepped into the ring for his first professional fight, against Edmund Ignacio. Pacquiao won the fight in four rounds by unanimous decision. The victory launched him on a successful boxing career that would last nearly two decades.

Pacquiao announced his retirement from boxing in 2021, at the age of 42, after 23 years in the sport. During his international boxing career, he won 62 fights, 38 of which were knockouts.

Along with his athletic career, Manny Pacquiao has demonstrated his vocal abilities by releasing two albums and collaborating on other tracks. He has also appeared in several films and was a regular on the Philippine sitcom Show Me Da Manny from 2009 to 2011.In 2015, the United States released a documentary ‘Manny’ about the former boxer’s life.

Senator Manny Pacquiao made his first attempt into politics in 2007, when he ran for a seat in the Philippines’ House of Representatives. He was defeated by incumbent Rep. Darlene Antonino-Custodio and has since returned to his full-time boxing career. Pacquiao, on the other hand, formed a new Filipino political party, the People’s Champ Movement, and ran for a legislative seat again in 2009. In May 2010, he won by a landslide, defeating opponent Roy Chiongbian to become the Sarangani province representative.

Three years later, Manny Pacquiao won a second term after running unopposed for reelection, and in 2016, the boxing legend used his popularity to win a seat as a senator in the Philippines.

He held these political positions despite being an active international boxer who traveled to boxing matches around the world. Below is the list of his government service.

Many have criticized Senator Manny Pacquiao for introducing a small number of bills and for being the most absentee among lawmakers during both of his terms in Congress.

According to records on the Senate’s official website, he authored 10 laws and co-authored 15 others during his first term. Moreover, according to the Legislative Information System, he was the primary author of only one law passed in the House of Representatives from 2010 to 2016. The relevant legislation, R.A. 10828, a regular district branch of the Land Transportation Office was established in Sarangani province. Below are some of his major legislations.

In 2013, the Bureau of Internal Revenue froze Manny Pacquiao’s bank accounts due to his failure to pay 2.2 billion Philippine Pesos in taxes.

The BIR also issued an order freezing Manny’s properties in the Philippines.

Pacquiao approached the authorities in an attempt to settle the case. Despite the fact that all taxes had been paid to the IRS, the BIR maintained that the taxes had not been paid.

Manny Pacquiao made a comment on same-sex marriage in a video statement posted by TV5 in February 2016. He described people in same-sex marriages as behaving worse than animals because, in general, animals do not have same-sex mating. LGBT celebrities slammed the senatorial candidate’s remarks.

He later apologized and stated that, while he is still opposed to same-sex marriage because it violates Biblical teachings, he does not condemn gay people themselves. In addition, Nike ended their long-standing partnership with Pacquiao, citing his homophobic remarks. The Grove at the Farmers Market in Los Angeles also barred Pacquiao.

Pacquiao wants to build a “mega prison” for corrupt officials

Pacquiao stated that if elected president in the May 9 national elections, his administration would have a zero-tolerance policy toward graft and corruption, and that even members of his administration would face consequences. All members of his Cabinet would also be subjected to a regular performance audit so that he could determine if they were doing their jobs properly.