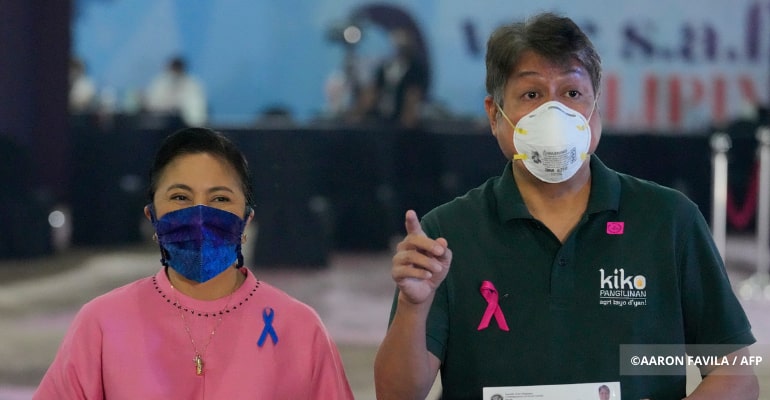 Get to know Francis Kiko Pangilinan before elections 2022; his background, educational and political achievements, and other details.

Francis “Kiko” Pangilinan is the vice-presidential aspirant of the Leni-Kiko tandem, with Leni Robredo as his running partner during the elections in 2022. Below are his personal, educational, and political details.

Born on August 24, 1963, in Manila, Philippines, Francis “Kiko” Pangilinan is one of the eight children of Donato Tongol Pangilinan Jr. and Emma Nepomuceno. He married actress-singer Sharon Cuneta on April 28, 1996, and they have four children together: Ma. Kristina Casandra, Simone Francesca Emmanuelle, Mariel Daniella Sophia and Miguel Samuel Mateo

Francis Pangilinan completed his college degree at University of the Philippines (UP) Diliman with the Bachelor of Arts in English Major in Comparative Literature. He later pursued a Bachelor of Laws at the College of Law, University of the Philippines (UP) Diliman. He then took Masters in Public Administration, with an area of concentration in Strategic Management in John F. Kennedy School of Government, Harvard University.

Before his affiliation with politics, Kiko Pangilinan had former positions.

Sen. Francis “Kiko” Pangilinan began his political career as a councilor in Quezon City in 1988. He was the youngest councilor elected in Q.C.’s 4th District. In 2001, he ran for his first Senate term. After six years, he was re-elected to the Senate. He signed several bills into law that benefit farmers. In 2014, he was appointed to a cabinet-level position as Presidential Assistant for Food Security and Agricultural Modernization.

As a senator, he sponsored and authored legislation that increased the salaries and benefits of justices, judges, and other members of the judiciary; established an alternative dispute resolution system; strengthened and rationalized the National Prosecution Service; and amended the Philippine Teachers Professionalization Act.

He was also the author of the Juvenile Justice and Welfare Act, as well as the Coconut Farmers and Industry Trust Fund Act, which seeks to establish a trust fund for coconut farmers. Below are his public services records.

• Chairperson, Committee on Constitutional Amendments and Revision of Codes

• Chairperson, Committee on Agriculture and Food

• Chairperson, Committee on Agriculture and Food

• Senate Representative to the Judicial and Bar Council

• Chairperson, Committee on Ethics and Privileges

• President Liberal Party of the Philippines

Francis “Kiko” Pangilinan wrote 103 bills during his three terms in the Senate. Eleven of the bills he principally authored were signed into law. Three of his bills in support of agriculture and fisheries were passed in the 18th Congress, including R.A. No. 11524, also known as the Coconut Farmers and Industry Trust Fund Act, which mandates the establishment of a 50-year trust fund and the transfer of at least P75 billion in accumulated coco levy to the trust fund between 2021 and 2025. Below is the list of some of his major legislative accomplishments.

Leni and Kiko have been seen to be together in most of their campaign rallies and activities around Samar provinces and Leyte but not in the rally in Borongan City. He confirmed on a news outlet on Wednesday, March 30, that he agreed not to attend the big rally in Borongan City the night before after learning that local leaders there would only support Robredo.

But despite what happened, he stays unfazed saying that the winners of the May elections would be decided by the voters. In a chance interview with reporters in Maigo, Lanao del Norte, presidential candidate and Vice President Leni Robredo said he would continue courting voters with his pro-agriculture and food security platform regardless of political support – or lack thereof.

Kiko Pangilinan has filed a criminal complaint against the creators and management of the pro-Marcos YouTube channel Maharlika for “libelous” content about his family. He said in a statement that they filed the complaint against Maharlika for alleged violations of Republic Act 10175, also known as the Cybercrime Prevention Act of 2012.

“The contents of the videos are all false, have no factual basis and are intended to destroy or damage my reputation as a senator, public servant, and a husband to one of the most beloved celebrities in the Philippines, Sharon Cuneta-Pangilinan,” he said.

He accused the people behind the Maharlika channel of “[acting] in reckless disregard as to the truth or falsity of the statements in the video” since May 21, 2021.

He also urged corporations placing advertisements on these and similar YouTube channels to stop enabling these sites that peddle lies and disinformation. He said that he is “counting on social media platforms, advertisers, online shopping sites, media and concerned sectors to be allies in ensuring that truthful, helpful and life-saving information gain wider prominence online.