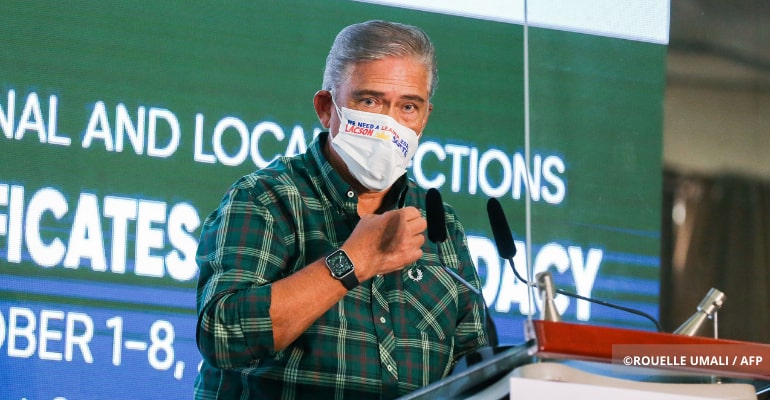 Get to know Vicente “Tito” Sotto III before elections 2022; his background, educational political achievements, and other details.

Senator Vicente “Tito” Sotto III is the vice-presidential aspirant of the Lacson-Sotto tandem, with Ping Lacson as his running partner during the elections in 2022. Below are his personal, educational, and political details.

Born on August 24, 1948, in Manila, Philippines, Vicente Sotto, later known as Tito Sotto, is  the son of Marcelino Antonio Ojeda Sotto and Dr. Herminia Castelo. He married Helen Gamboa on September 22, 1969, and they have four children together: Romina Frances, Diorella Maria, Gian Carlo, and Ciara Anna.

Tito Sotto completed his college degree at Colegio de San Juan de Letran in Intramuros, Manila with a Bachelor of Arts major in English. He then enrolled in the Harvard University John F. Kennedy School of Government’s Executive Program for Leaders in Development, which he completed in June 2000.

Before his affiliation with politics, Senator Tito Sotto had a career in showbiz. Tito Sotto began his career in the entertainment industry in the 1960s as a member of the band Tilt Down Men. Later, he was appointed Vice President of Orly Ilacad’s Vicor Music Corporation. In 1986, his composition “Magkaisa” became the People Power Revolution’s anthem.

He made a name for himself as a comedian alongside his brother Vic Sotto and Joey de Leon. Tito, Vic, and Joey became the main hosts of the long-running noontime show Eat Bulaga!

Tito Sotto, an award-winning composer, world-class bowler, and producer who launched the careers of some of the country’s biggest singers, was not satisfied with his private achievements.

Tito Sotto, now Tito Sen, shifted his focus to public service, and he was equally prolific in this endeavor. He was elected as Quezon City’s vice mayor in a resounding victory.  He introduced the policy framework for the country’s anti-drug campaign. He is in charge of over 100 laws and has held every leadership position in the Senate. Below are the government positions he held.

Senator Tito Sotto is the chamber’s most senior member, having served as a senator for more than two decades. He has also served nine Senate presidents.

Laws passed in the 17th Congress

Vicente “Tito” Sotto III has passed 7 laws in the current 17th Congress, where he served as majority leader and then Senate President, with 4 bills** awaiting President Duterte’s signature. Among these are:

Senator Tito Sotto or Tito Sen is under the Nationalist People’s Coalition or NPC from 2007 up to present. His other political affiliations before were United Nationalist Alliance or UNA and Laban ng Demokratikong Pilipino or LDP from 2013-2015 and 1987-2007 respectively.

In 2012, Sotto was accused of plagiarizing several passages in a speech in the Philippine Senate opposing the Reproductive Health Bill.

Several local and international news outlets, as well as internet users, reported that Sotto stole the passages from Sarah Pope’s 2011 blog entry, an American home economist blogger. Sotto claimed to be quoting Natasha Campbell-McBride, who was mentioned in the blog post.

When Pope learned of the controversy, she confirmed Sotto’s plagiarism in another blog entry on August 16, 2012, strongly criticizing Sotto for the plagiarism, denying it, and his stance on contraception. She also stated that she had no plans to sue.

In a comment on Pope’s blog, Sotto’s chief of staff admitted to using the blog post but failing to credit Pope’s work. Pope responded to the comment by criticizing Sotto’s position on the Reproductive Health Bill once more.

Moreover, Kerry Kennedy, the late American senator Robert F. Kennedy’s daughter and president of the Robert F. Kennedy Center for Justice and Human Rights, wrote a public letter to Sen. Sotto on November 9, 2012, accusing him of flagrantly and deceptively plagiarizing Robert F. Kennedy’s 1966 Day of Affirmation speech in his remarks to the Philippine Senate on September 5, 2012. Sotto has since apologized, but he still refuses to admit he plagiarized his speech. – WhatALife! / Hannah