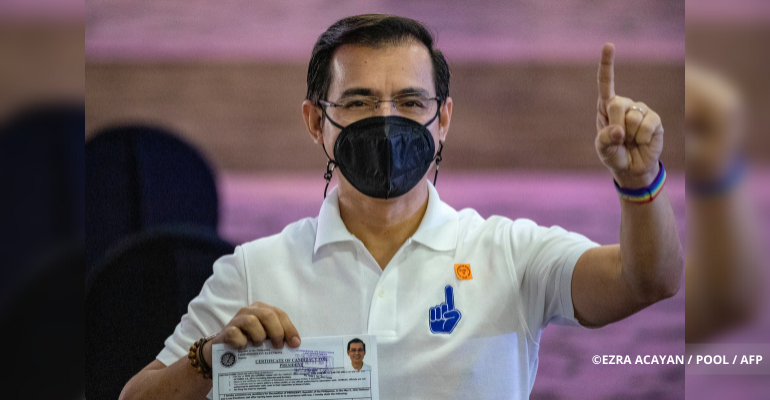 Get to know Isko Moreno before elections 2022; his background, educational and political achievements, and other details.

Isko Moreno is the presidential aspirant of the Moreno-Ong tandem, with Doc Willie Ong as his running partner. Below are his personal, educational, and political details.

Isko finished his tertiary education at the International Academy of Management and Economics. He then proceeded with his post-graduate studies:

Before his time as a public servant, he was part of the entertainment industry as a popular host.

In 1993, Filipino talent scout Wowie Roxas discovered the fair-skinned Francisco Moreno Domagoso while attending a funeral. He persuaded him to enter the Philippine show business with the stage name “Isko Moreno.”

Isko then became a popular host of the daily entertainment variety show “That’s Entertainment,” produced by then a pillar of the local entertainment industry, German Moreno.

Isko’s public popularity in the entertainment industry only lasted for a few years before he ran for a city council seat in Manila’s first district in 1998.

In 2001 and 2004, he was re-elected as city councilor of the 1st District of Manila. He only left his seat as councilor when he won as vice mayor for the City of Manila in 2007.

At this time, he decided to widen his knowledge in crafting and delivering the right policies by taking courses in Local Legislation and Finance, Public Administration, and Law in local universities in the Philippines. The previous section lists education modules he took in foreign schools such as Harvard and Oxford.

In 2016, he ran for a seat in The Philippine Senate. However, he narrowly missed his chance in the legislative house of the government. The following year, Isko was appointed as Chairman of the Board of the North Luzon Railways Corporation. Then, in 2018, he became Undersecretary for Luzon Affairs in the Department of Social Welfare.

Finally, in 2019, Isko decided to run and won the position of Manila City Mayor. During this time as mayor, his constituents fondly address him as “Yorme Isko.” Currently, he is busy taking care of his city as mayor while running for president in the 2022 elections.

Isko Moreno has implemented plenty of programs for the City of Manila since his term. These are programs that vary from health, education, financial assistance, and more.

During his years in public service, Yorme Isko Moreno has been affiliated with a few organizations, such as the Vice Mayors League of the Philippines, where he was National President from 2008 to 2016. He was also the Vice President of the Union of Local Authorities of the Philippines from 2014 to 2016.

During the 2007 and 2010 polls, Isko Moreno Domagoso had a strong tandem with former Manila City Mayor Alfredo Lim.

However, a few months before announcing that the Lim-Isko tandem will remain solid, Domagos made a statement in May 2012 that he would be running under former President Joseph Erap.

The controversial Erap-Isko tandem ran for Mayor and Vice Mayor during the 2013 mayoral elections, of which the two won their respective seats.

However, after his run as vice mayor to Erap, Isko created a rift between them when he ran for mayor against his former mayor during the 2019 mayoral elections.

Below is his political party history:

Isko further highlighted his opinion during the Kapisanan ng Brodkaster ng Pilipinas (KBP) Presidential Candidates Forum. He said that there is nothing wrong with politicians moving from one political party to another so long as their loyalty remains to the people and that the law allows it.

He also admitted that politicians like him use parties to help them secure victory during the elections.

Isko keeping the P50 million in excess campaign funds in 2016

Another issue touched during his interview was the leftover campaign funds during his failed senatorial run in 2016.

When asked where the funds are, the presidential aspirant replied admits that the P50.8 million are with him. He also explained that the funds were “aboveboard” since he paid the corresponding taxes compliant with the government rules.

In a 2016 report of the Philippine Center for Investigative Journalism (PCIJ), the presidential aspirant paid P9.7 million in taxes for his income worth P50.55 million after his failed senatorial run.

There are no laws in the country that make it illegal for candidates to pocket leftover money from their campaigns. So, any aspirant can pocket millions without violating any election or tax laws.

However, this wealth is in contrast with Domagoso’s brand as a “middle-class man” with his tough-talking street slang. In fact, he has admitted to having P70 million net worth as of October 2021. – WhatALife!