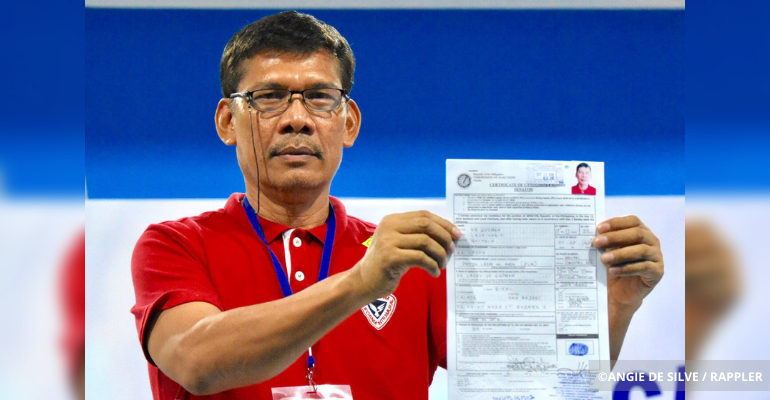 Get to know Ka Leody de Guzman before elections 2022; his background, educational and political achievements, and other details.

Ka Leody is the presidential aspirant of the Leody-Bello tandem, with Walden Bello as his running partner. Below are his personal, educational, and political details.

Leody de Guzman was born on July 25, 1959, in Naujan, Oriental Mindoro. He is married to Marieza Tolentino. Together, they have three children: Prolan, Lea, and Dexter.

After studying at Naujan Academy in Oriental Mindoro, Ka Leody proceeded with his higher education at the Philippine Maritime Institute (PMI) Colleges. There, he graduated with a degree in Bachelor of Science in Customs Administration.

He was an employee at a factory of Aris Philippines, Inc, a leather gloves company.

Leody de Guzman has been known as a labor leader and an activist for more than 35 years. Currently, he is the national chairman of the Bukluran ng Manggagawang Pilipino or the Solidarity of Filipino Workers (BMP). It is a socialist labor center in the Philippines.

He is also a founding member of the Nagkaisa Labor Coalition, “the biggest alliance of labor groups and workers organization in the modern history of the trade union movement in the country.”

Other than Nagkaisa, he is also a founding member of the Partido Manggagawa Party-list. Ka Leody was also a Regional Executive Council Member of the Kilusang Mayo Uno. It’s another independent labor center that promotes “genuine, militant and patriotic trade unionism.” It aims to “protect and promote the worker’s right to employment, a decent wage, humane working conditions, and their right to form unions, bargain collectively and to strike,” and so on. Read Kilusang Mayo Uno‘s full description on their official Facebook Page.

During the Philippine House of Representatives party-list election in 2016, Ka Leody ran as the first nominee of Sanlakas Partylist. However, the party-list did not win any seats.

In the following elections in 2019, Leody de Guzman ran as a senator under the Partido Lakas ng Masa. He formed the pro-worker Labor Win coalition that year with various individuals that also supported workers’ rights. However, he placed 38th out of the 62 candidates with almost 900,000 votes and did not win a seat.

Currently, Ka Leody is running as a presidential candidate for the 2022 elections. He is once more nominated by the Partido Lakas ng Masa.

Ka Leody was once affiliated with Justice for Aquino, Justice for All (JAJA) Movement. He attended pro-democratic, anti-Marcos opposition protests and led the Aris Philippines branch of the JAJA Movement.

Leody de Guzman is also a Board of Trustees member of PhilRights in 2019 and Bulig Visayas from 2013 to present.

Late in February, many individuals reported the unusual landing page of a domain “kaleody.com” that redirects to bongbongmarcos.com.

The official website of labor leader and presidential aspirant Leody de Guzman is “kaleody.org.” However, social media users have reported that another domain with his name redirects to the presidential seat rival Bong-bong Marcos (BBM).

In a report by InterAksyon, the “kaleody.com” domain was only registered on February 23, 2022, through a US-based internet company named Tucows, Inc.

Ka Leody announced that they are “currently studying how to file a case against those behind the domain grabbing” in a Viber message.

“We already expected that these elitist traditional parties play dirty; however, I did not expect them to steal even my name like how they stole everything else,” Ka Leody said.

The Marcos camp has not yet released a statement with regards to the issue.

On February 8, 2022, Ka Leody, with tandem Walden Bello, proceeded with their proclamation rally despite failing to secure a permit from the COMELEC.

Elaiza Sabile-David, COMELEC director, said that there was no record of a campaign application permit by de Guzman’s camp for his rally at the Bantayog ng mga Bayani. It was a clear election offense, according to David.

Resolution 10732 of COMELEC requires applications for election campaign activities to be secured 72 hours ahead of schedule. Moreover, violators may face penalties including jail time up to six years, disqualification, or deprivation of the right to suffrage.

Sonny Melencio, the campaign manager of Ka Leody, explained in a television interview that they “rushed to file a permit ahead of the rally, which had a last-minute change of venue.”

Additionally, they have a permit approved by the Quezon City government for a rally in Amoranto, their original location. However, the team decided to transfer to the Bantayog ng mga Bayani instead, which resulted in the “lapse.”

The presidential candidate announced that he was prepared to face possible election offenses but stressed that they followed health protocols set by the COMELEC due to COVID-19. – WhatALife!