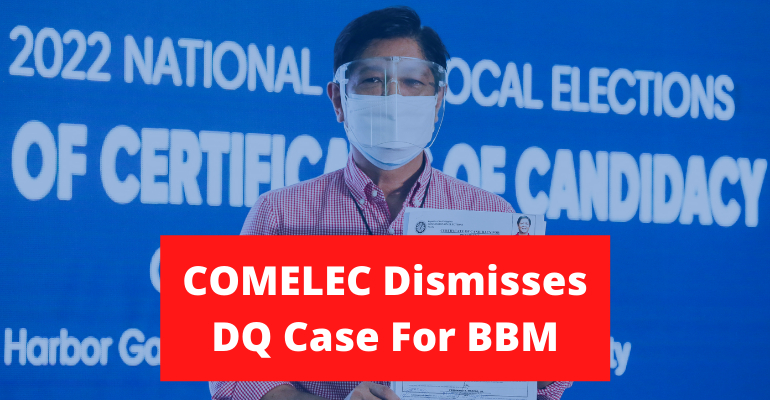 Manila, Philippines – The Commission on Elections COMELEC First Division voted 2 – 0 to dismiss the consolidated disqualification cases against presidential candidate Ferdinand “Bongbong” Marcos Jr., known by his supporters as BBM, for lack of merit.

In a tweet posted by Comelec Spokesperson James Jimenez on Feb 10, 2022, which stated as follows

The former first division, is composed of Commissioner Aimee Ferolino, the ponente in the petitions, and Commissioner Marlon Casquejo.

“Contrary to Petitioners’ assertion, the penalty of perpetual disqualification by reason of failure to file income tax returns was not provided for under the original 1977 NIRC (National Internal Revenue Code). Both Petitioners Ilagan et al. and Akbayan et al. cited Section 252 of the 1977 NIRC, which upon Our verification, is a provision pertaining to the “‘Falsification, or counterfeiting, restoration, or alteration of documentary stamps; possession or use of false, counterfeit, restored, or altered stamps,”

It added: “However, a further review of the 1977 NIRC would belie Petitioner’s claim; while there was indeed a provision on perpetual disqualification, the same is applicable only on unlawful possession or removal of articles subject to specific tax without payment of tax. To be clear, the penalty of perpetual disqualification came into force only upon the effectivity of P.D. No. 1994 on 01 January 1986. Thus, the penalty cannot be made to apply to Respondent’s tax violations, which were committed before the effectivity of the said law, in accord with the constitutional prohibition against ex post facto laws.” the 45-page resolution read.