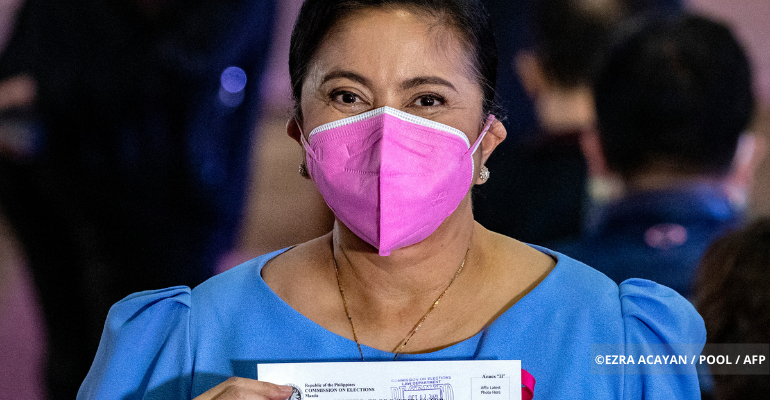 Get to know Leni Robredo before elections 2022; her background, educational and political achievements, and other details.

The May 9, 2022 elections are just a few weeks away. It is high time that we get to know our candidates so we can choose the right people to take the highest positions in our country. The Know Your Elections 2022 Candidate is a series of blogs containing fact-based information from the candidates’ official websites and other credible sources.

Leni Robredo is the presidential aspirant of the Leni-Kiko tandem, with Senator Kiko Pangilinan as her running partner. Below are her personal, educational, and political details.

Before her affiliation with politics, Leni Robredo performed various jobs in the education and legal sector.

During her time as a lawyer in PAO, she rendered legal services to indigent litigants. She also provided legal education for clients through legal clinics and helped them understand relevant laws by translating and publishing Bicol Versions of the text.

It was until 2013 that Leni Robredo’s political career began.

She was also the chairman of the Housing and Urban Development Coordinating Council in 2016 and the Co-chairperson of the Inter-Agency Committee on Anti-Illegal Drugs (ICAD) in 2019. In addition, she is vice-chairman of the Committee on Good Governance and Public Accountability and on Revision of Laws.

Below is the list of committees she was a part of:

During her time as a Congresswoman of the 3rd District of Camarines Sur, she has passed 7 laws and 5 bills filed.

Below is the list of laws she has passed:

Below is the list of bills she has filed as Congresswoman:

After becoming Vice President of the Philippines in 2016, she made way for the beginning of the Office of the Vice President’s flagship anti-poverty program, Angat Buhay. Moreover, the program aims to solve six key areas: food security and nutrition, women empowerment, education, healthcare, rural development, and housing.

She also launched the Istorya ng Pag-asa program that features stories of Filipinos through words and portraits. Events, exhibits, and social media then feature these stories.

President Rodrigo Duterte assigned Leni Robredo sa ICAD (Inter-Agency Committee on Anti-Illegal Drugs) co-chair in 2019. Her time in the position aimed to make the anti-illegal drug campaign more holistic, data-driven, and with a human approach. In addition, she released a report on the current state of the campaign and the various gaps to be filled, including their solutions. However, after 18 days in the position, PRRD dismissed Leni from her post.

Below is the list of projects she headed during her term as Vice President:

Allegations of using religion to campaign

After her visit to the religious leaders of the Cathedral-Shrine and Parish of the Good Shepherd in Novaliches, Quezon City, in March, presidential aspirant Leni Robredo faced criticisms. Also, her visits to churches during her rallies further spurred the allegations.

However, Leni and her camp denied these statements. In an interview after her meeting with the volunteers in Cavite, she responded to the allegations and explained that her visits to the church are to ask for help in fighting disinformation:

“Yung pagpunta natin sa simbahan very defined ‘yung dahilan. At ‘yung pinakadahilan talaga kung bakit kailangan natin hingiin ang tulong ng simbahan, gusto natin silang gumalaw dito sa fight natin against disinformation.” (Our visits to the church have very defined reasons. And the very reason why we need help from the church is we want them to move in the fight against disinformation.)

Atty. Barry Gutierrez, the spokesperson of Leni Robredo, also released a statement. He clarified that the the parishes sponsored and organized the visits, held only for “conversation and prayer” and not for campaign events.

“Kung desisyon ng parokya na i-offer yung espasyo, tiwala kami na dahil yun sinasalamin ni VP Leni ang prinsipyo at paniniwala nila,” he added. (If it is the parish’s decision to offer the space, we trust that it is because VP Leni embodies their principles and beliefs.)

In a DZRH radio program that aired on March 5, Cavite 7th Representative Jesus Crisping “Boying” Remulla claimed that a campaign rally on General Trias had paid attendees PHP 500 each.

He did not mention any names. However, there was a rally on March 4 at the General Trias Sports Park with 47,000 supporters of the Leni-Kiko tandem. He also mentioned the color pink, which is the campaign colors of Leni Robredo.

Moreover, Remulla mentioned that there were students that looked like “activists” trained by the National Democratic Front.

Leni Robredo’s supporters responded to these allegations. The Robredo People’s Council (RPC) – Cavite (posted on social media by Cavite 6th District Board Member Kerby Salazar) released a statement that the participants showed up due to volunteerism.

Her supporters clarified that “no one was brought and bought with PHP 500 in exchange for participating in the said rally.” – WhatALife!