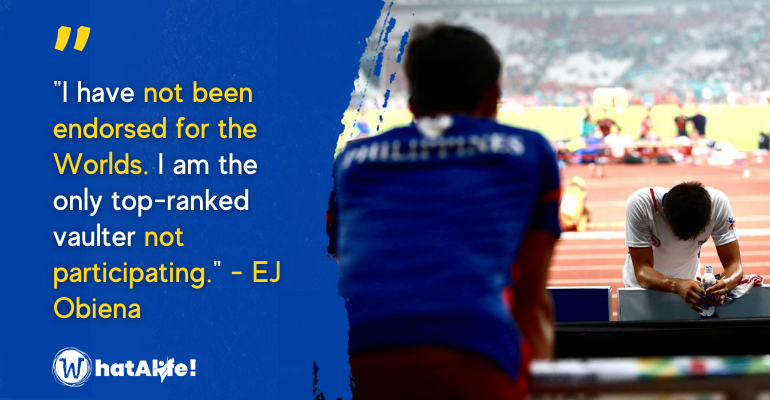 Despite qualifying for the World Indoor Championships, Asia’s top pole vaulter EJ Obiena expressed disappointment that he will not be able to compete.

A window closed just when the door was ready to open for Filipino pole vaulter Ernest John “EJ” Obiena. The athlete was caught in a funding issue with the Philippine Athletics Track and Field Association (PATAFA).

In a Facebook post on Saturday, the Pinoy athlete noted that based on his recent performance in previous contests, he may have been the first Filipino home-grown athlete to compete in the event.

“With my recent results I have qualified for the World Indoor Championships. I am currently ranked 5th and holding the 4th highest jump of the season. This competition is next week in Belgrade, Serbia,” said Obiena in his latest Facebook post.

“I am in prime physical and mental condition. I am ready to be the first Philippine HOME-GROWN athlete to compete in the Worlds, and I am ready to compete and bring home a medal. Now is my time; NO, now is our time! But sadly, we will never know,” he added.

Obiena recently set a new Philippine indoor record with a clearing of 5.91 meters while finishing second at the Perche Elite Tour in Rouen, France. He also holds the Asian record of 5.93 meters, which is far higher than the SEA Games mark of 5.45 meters, which he achieved during the 2019 edition.

Even though he was in “prime physical and mental condition,” Obiena expressed regret over Patafa’s decision not to endorse him.

“I have not been endorsed for the Worlds. Registration is now closed. I won’t be attending. I am the only top-ranked vaulter not participating,” Obiena said.

The federation has also denied his request for the Vietnam SEA Games, the World Championships in Oregon in July, and the Asian Games in Hangzhou in September. – WhatALife!

Also Read: PDEA-10 stopped the entry of PHP27-M worth of illegal drugs in Iligan City