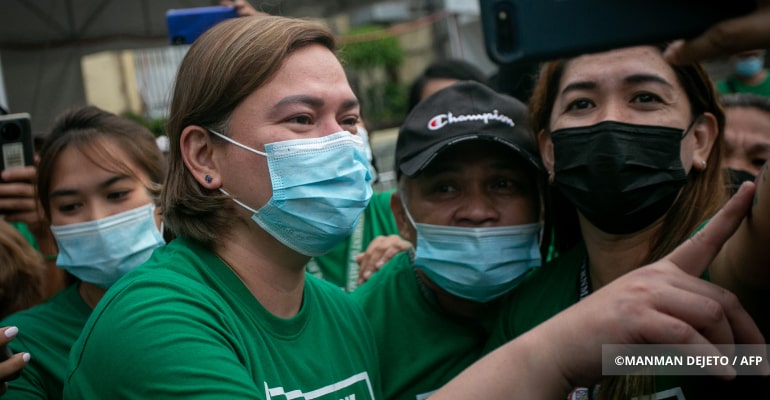 Get to know Mayor Inday Sara Duterte before elections 2022; her background, educational and political achievements, and other details.

Mayor Inday Sara Duterte is the vice-presidential aspirant of the UniTeam tandem, with Bongbong Marcos as her running partner during the elections in 2022. Below are her personal, educational, and political details.

Born on May 31, 1978, in Davao City, Philippines, Mayor Inday Sara is the daughter of incumbent President of the Philippines Mr. Rodrigo Roa Duterte and Ms. Elizabeth Zimmerman.

She married Manases Carpio on October 27, 2007, and have three children: Mikhaila María, who is an adopted daughter, Mateo Lucas a.k.a. Stingray, and Marco Digong a.k.a. Stonefish.

Mayor Inday Sara completed her college degree at San Pedro College with the Bachelor of Science in Respiratory Therapy in 1999. She later pursued a degree of law at the San Sebastian College – Recoletos and graduated in May 2005.

In 2007, she won as the running mate for her father, who was running for mayor. She then became Davao City’s first female mayor and the city’s youngest mayor in the city’s political history after switching roles with her father, Rodrigo “Rody” Duterte, as mayor and vice-mayor from 2010 to 2013. The following are her work experiences.

All in all, she has served 3 years as Vice Mayor and 9 years as Mayor.

Under Duterte’s leadership, Davao rose to the eighth richest city in the country in 2020, up one spot from the previous year. The Department of Trade and Industry also named Davao the fourth most urbanized city in the Philippines as of 2021, based on economic dynamism, government efficiency, infrastructure, and resiliency metrics.

Later, from 2016 to 2022, she served in the RDC and the Regional Peace and Order Council as a support member.

Her achievement in eradicating the city’s debt was also near the top of her list, as she prepares to leave her city hall post after the election.

She also “dramatically” reduced the number of child abuse complaints with no child deaths reported due to abuse and maltreatment through a child welfare hotline and assistance program.

There was also an expansion of the coverage of the Lingap Para sa Mahirap program, which assisted Davao residents with their hospital bills. It was enhanced further with the one-stop shop medical assistance concept, which gathered under one roof all national government agencies with services for medical assistance, allowing patients in many cases to pay nothing.

Punching a court sheriff in public

Long before her father became President of the Philippines, Mayor Inday Sara already made headlines as the city mayor who famously punched a court sheriff in public.

The incident, which was captured on video, quickly went viral in an age before social media’s dominance.

She was trying to postpone the demolition of a nearby slum. After repeatedly punching the man in the face and head, she was dubbed “the slugger” by one media outlet.

The nickname was a nod to the fact that she is as feisty, headstrong, and controversial as her father. This then made many Filipinos see her as the ideal candidate to replace her father’s legacy.

More than a decade later, Sara Duterte proudly recalls the controversy. In fact, it is now included in her official profile as a vice presidential candidate in the 2022 elections.

It was a “turning point” in her political career, according to her. She was a little more than a year into her first term as mayor at the time. This was after she completed a three-year term as vice mayor – her first elected position. According to Mayor Inday Sara Duterte, the punching incident serves as a “constant reminder not to embarrass the mandate given to [her] by the people.” – WhatALife! / Hannah