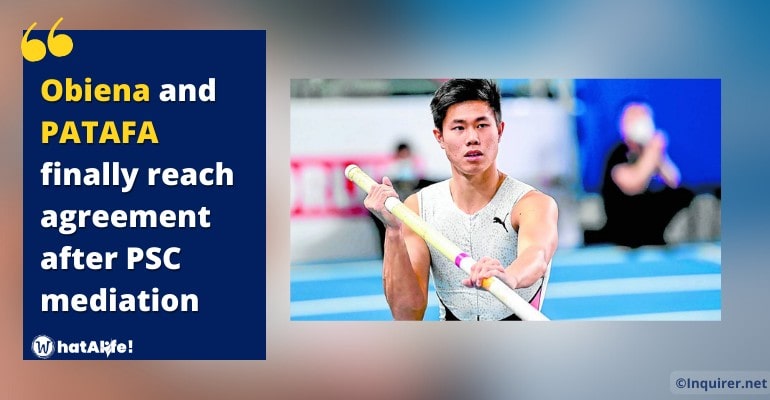 All’s well that ends well for EJ Obiena, the world’s No. 5 pole vaulter, and the Philippine Athletics Track and Field Association, who agreed to stop their five-month conflict.

The Philippine Sports Commission (PSC) stated on Wednesday that ace pole vaulter EJ Obiena and the PATAFA had reached an agreement through the national sports body’s mediation procedure.

Both sides have also agreed that Obiena’s participation in other competitions, such as the Hangzhou Asian Games, which will take place from September 10 to 25, will be governed by PATAFA’s standard rules and regulations, which will apply to all national athletes, not only the Asian record-holder.

“It is with much joy that we announce that both parties have agreed to a settlement and the proceedings ended successfully,” said Ramirez, who had previously stated that he would make the announcement on Thursday.

The agreement paved the door for Obiena to be endorsed by the national athletics organization to compete in two major competitions: the 31st Southeast Asian Games (SEA Games) and the World Athletics Championships in 2022.

The 31st Southeast Asian Games will be placed in Hanoi, Vietnam in May, while the World Athletics Championships will be conducted in Oregon, USA in July.

“Mr. Obiena expressed his apologies to PATAFA, its board members, and his teammates, and both have assured each other forgiveness, to start anew and start over,” Ramirez said.

Meanwhile, the Philippine Olympic Committee (POC) postponed its executive board’s decision to ban PATAFA for 90 days throughout its general assembly (GA) at the Knight Templar Hotel in Tagaytay but reminded the national sports association that they will make decisions at the GA next month.

The PSC is not disclosing any details regarding the mediation, but Ramirez claims that “humility played a big part in this process.” – WhatALife!

Also Read: Will Smith apologizes to Chris Rock for slapping at Oscars