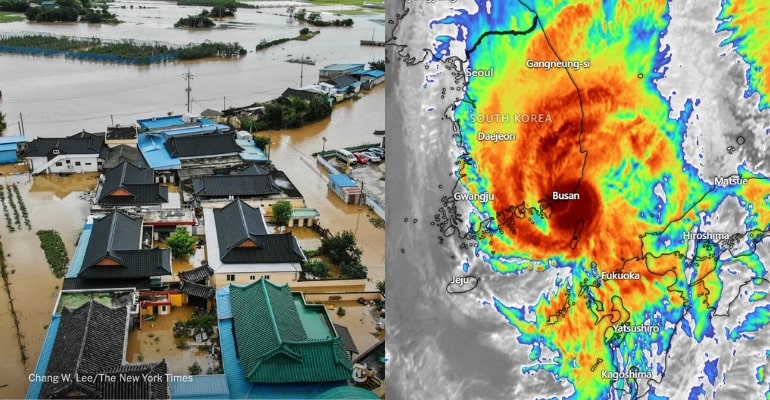 SOUTH KOREA — On Tuesday, September 6, Typhoon Hinnamnor landed before returning to the sea, leaving one person dead and nine missing in South Korea.

The typhoon, one of the worst to hit South Korea in decades, made landfall on the southern island of Jeju overnight before moving on to the port city of Busan, which was battered by huge waves and heavy rains that destroyed beachside roads and shops.

According to the Korea Meteorological Administration (KRM), after making landfall near the coastal city of Geoje, the typhoon left the Korean peninsula at around 7:10 AM local time (22:10 GMT on Monday) over waters off Ulsan in the southeast.

The storm caused more than 60,000 households nationwide to lose electricity, and hundreds of flights, commercial operations, and classes had to be cancelled.

Typhoon warnings have been lifted across most South Korea except in some regions, including the southern Ulsan, North Gyeongsang province, and the eastern Gangwon province.

According to the defence ministry, the military has prepared amphibious vehicles for rescue missions.

Neighbouring North Korea also prepared for typhoon damage with leader Kim Jong Un presiding over a two-day conference on disaster preparation measures and releasing water from a dam close to its border with South Korea.

According to the embassy, no citizens have been impacted by the typhoon due to communication between the Philippine Embassy in South Korea and Filipino community leaders in the affected areas. –WhatALife!/Brix