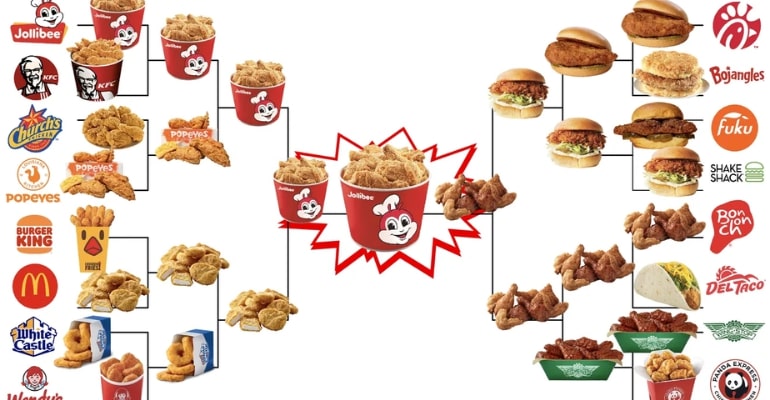 USA —  Global food website Easter.com, under Vox Media, put to the test 16 of the best food brands in America to find which is the best fried chicken – Jollibee Chickenjoy bested them all.

In the final round, Chickenjoy bested the BonChon Chicken.

“The Filipino fried chicken chain made its U.S. debut in 1998 and has since developed a cult following for its chickenjoy, what the chain calls its bone-in fried chicken, as well as its meat-topped spaghetti (though that won’t be a factor for judging here),” Easter.com described the Filipino fast-food chain Jollibee.

Eater.com’s Special Projects Editor Lesley Suter explained why Chickenjoy was hailed as the best fried chicken in America, saying “the subtly seasoned skin is as tectonically crunchy as advertised, if loosely attached in such a way as to be able to slide off an entire hunk with one bite.”

“But the real surprise here was the chicken itself: satisfyingly light, flavorful in a ‘tastes like chicken’ sort of way, and supremely moist,” Suter added.

She also acknowledged that Jollibee’s signature gravy is non-negotiable, while Americans can eat fried chicken without gravy (and rice), it’s simply not the case with Chickenjoy. She praised Jollibee’s gravy, saying that it “completes the dish.”

“It is more than just an optional dunk; it completes the dish, gelatinous in a way I can only describe as naughty, while proudly showing its Filipino colors with a hefty dose of sugar,” the editor wrote.

The Filipino fast-food chain has over 1,500 restaurants worldwide, with 84 locations across North America. A branch will also open this month at Times Square, New York. –WhatALife!/Zed