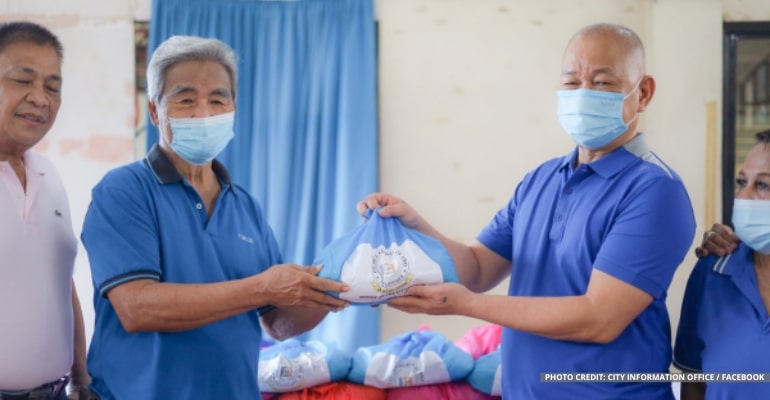 CAGAYAN DE ORO CITY, PHILIPPINES — Mayor Rolando’ Klarex’ Uy pledged to allocate rice bags as ‘food aid’ to 500 impoverished families in every barangay. For this purpose, he will attend one barangay’s flag-raising program every week starting this month.

He confirmed his intentions while announcing that the next ‘Klarex Nga Serbisyo Sa Bary’ program will be held in Barangay Balubal sometime this month. The first was held at Barangay Tinagpoloan.

In addition, Uy asked the City Hall employees to raise their concerns personally on the days of the week reserved for them (Mondays, Tuesdays, and Fridays), as Wednesdays and Thursdays are reserved for People’s Day for the public.

After Camaman-an’s flag-raising program, Mayor Uy turned over the 500 food packs for impoverished families in the barangay to Camaman-an chairman Pedro Arda.

In launching his barangay food aid program, Mayor Uy called on the Camaman-an barangay officials to serve their constituents to the best of their abilities and to embody ‘the spirit of public service.’

Camaman-an chairman Adra thanked Mayor Uy for his sustained support of their barangay, even during the Mayor’s tenure as congressman of CDO’s first district. In addition, he acknowledged Uy’s support during the pandemic when his staff distributed food packs to families affected by localized containment enforced in their area.

Adra also asked Mayor Uy that the barangay distribute the 500 food packs allocated for their impoverished families from house to house.

“We have 400 civilian volunteers that can distribute the 500 food packs house to house. However, we have 17 sitios, and it would be difficult for us to distribute all food packs (here in our barangay hall),” he told Uy, to which the Mayor readily agreed.

Mayor Uy attended Camaman-an’s flag-raising ceremony as part of his pledge to distribute food packs to disadvantaged families in every barangay he visits for the week. – WhatALife!/Zed