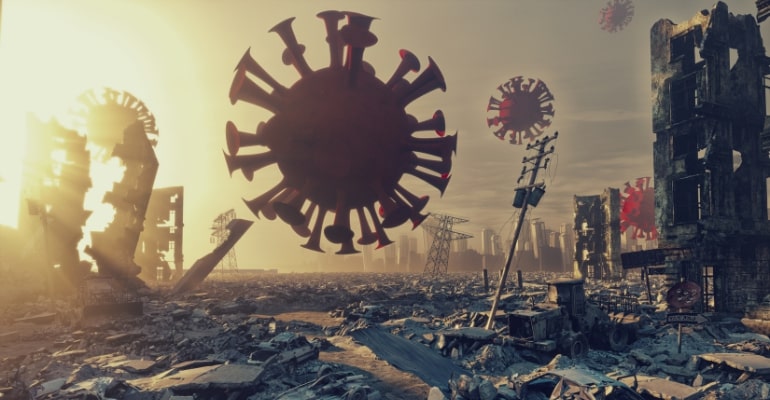 Yet again, social media has overtaken the minds of headline readers, putting everyone in a full-blown unnecessary panic. To help mitigate the situation, this blog aims to straighten things out and put it out there once and for all – NO, it is not the beginning of a Zombie Apocalypse, contrary to your pop-culture beliefs.

A “zombie virus” is a term used for viruses that have been dormant for thousands of years. They are generally discovered in the permafrost, which is irreversibly melting due to rising global temperatures caused by climate change.

YES, a team of scientists did find zombie viruses in the Siberian permafrost. Plural, since they found 13 zombie viruses, with only one remaining infectious after more than 48,500 years deep in the permafrost.

Known as the “pandoravirus,” the live amoeba virus infects only single-cell organisms and should pose NO threat to humans. It was found at the bottom of a lake in Yukechi Alas, Yakutia, Russia, along with other discoveries such as mammoth fur to Siberian wolf intestines.

The study is conducted by the French National Center for Scientific Research, led by microbiologist Jean-Marie Alempic.

So far, there has been limited research into the “live” viruses found in permafrost. However, the authors of the study led by Alempic state that the appearance of zombie viruses should not be considered rare, nor shall they be treated as non-threatening to public health.

They also said further work is needed to assess the dangers of the viruses in permafrost, which continue to melt due to climate change.

“One-quarter of the northern hemisphere is underlain by permanently frozen ground, referred to as permafrost,” the study reads.

“Due to climate warming, irreversibly thawing permafrost is releasing organic matter frozen for up to a million years, most of which decomposes into carbon dioxide and methane, further enhancing the greenhouse effect,” it added, “Part of this organic matter also consists of revived cellular microbes as well as viruses that remained dormant since prehistorical times.”

The statement above declares that whether or not scientists “revive” dormant viruses, the warming planet will still cause the re-emergence of deadly bacteria frozen for thousands, or even millions, of years.

The role of the studies conducted by scientists is to find a way to mitigate the effects of the virus if it does threaten public health in the future. They are not digging up old zombie viruses to cause a “zombie apocalypse” – a totally unrelated fantastical, pop-culture-directed type of pandemic. – WhatALife!