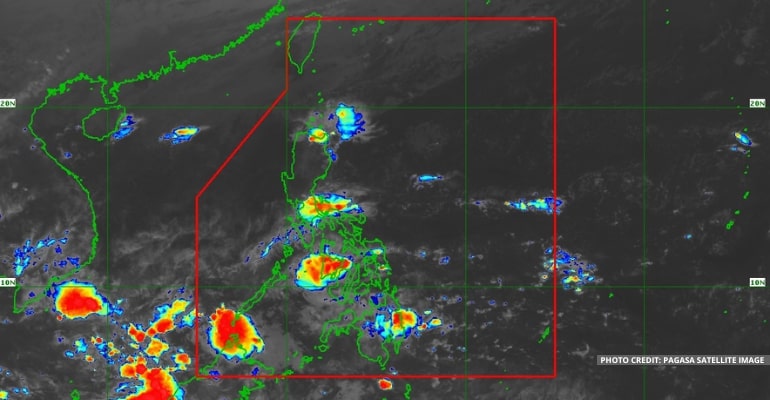 WEATHER UPDATE — According to the Philippine Atmospheric, Geophysical, and Astronomical Services Administration (PAGASA), one to two tropical storms may enter the Philippine Area of Responsibility (PAR) in December. At the moment, no Low-Pressure Area has been spotted, and only two weather systems (shear line and ITCZ) are affecting the country.

The month of December may bring two tropical storms into the country, to be named Rosal and Samuel.

In the Tropical Cyclone Climatological Track presented by DOST-PAGASA Weather Specialist Benison Estareja, the most likely movement of the tropical storms is towards Northern Mindanao, Eastern Visayas, and Northern Luzon. Storms in December have more chances of landfall and may reach typhoon or super typhoon categories.

For today’s weather forecast, no LPA has been spotted inside PAR until the weekend. However, the shear line and Intertropical Convergence Zone (ITCZ) continue to affect the country.

Since yesterday evening, the shear line has brought heavy rains to Northern Luzon.

On the other hand, the ITCZ continues to bring isolated rain showers to Visayas and Mindanao.

Batanes, Cagayan, and Apayao have high chances of rain for the next 24 hours due to the shear line affecting Northern Luzon. As a result, residents are warned of flash floods and landslides.

Meanwhile, Quezon Province, Rizal, Laguna, and Camarines Norte may expect isolated rain showers due to localized thunderstorms. The shear line also affects CALABARZON and Metro Manila, bringing partly cloudy to cloudy skies in the morning and rains in the afternoon.

Due to localized thunderstorms, the rest of Luzon is forecast to have isolated rain showers by the evening.

Heavy rains are brought by the ITCZ to Visayas, particularly in Southern Visayas, in the morning, which may weaken by the afternoon and regain strength in the evening.

Chances of rain are high in Davao Region, CARAGA Region, Northern Mindanao, and Zamboanga del Norte due to the ITCZ.

The rest of Mindanao, particularly SOCCKSARGEN, BANGSAMORO Region, and the Zamboanga Peninsula, are forecast to have partly cloudy to cloudy skies in the morning and rains in the afternoon till evening.

A gale warning has also been issued to Batanes, Cagayan (including the Babuyan Islands), Ilocos Norte, Ilocos Sur, La Union, and Pangasinan due to the shear line.

Also read: PAGASA: No LPA for the next three days