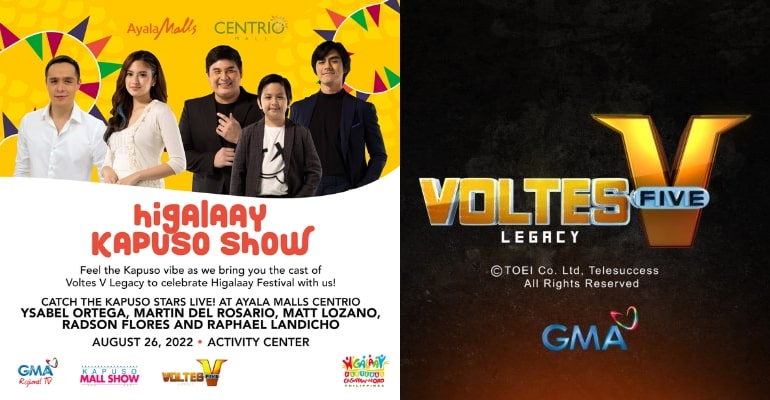 CAGAYAN DE ORO CITY, PHILIPPINES — This Friday, August 26, the main cast of Voltes V: Legacy will be in the Kapuso Higalaay Show at the Activity Center of Centrio Ayala Mall.

The cast of the Voltes V: Legacy, the upcoming live-action television adaptation by GMA Network of the Japanese anime television series, will be in Cagayan de Oro City this weekend for the Higalaay Kapuso Show.

The series is a Philippine television drama, action, science fiction, and fantasy series to be broadcast by GMA Network. Directed by Mark A. Reyes, the upcoming Voltes V: Legacy series is slated to air in 2023.

The Voltes V: Legacy is based on the Japanese anime television series Chōdenji Machine Voltes V by Toei Animation and Sunrise. Through Telesuccess Productions, Toei’s Philippine licensee, the GMA Network acquired the rights to make a live-action adaptation.

On May 5, 1978, Voltes V was broadcast in the Philippines on GMA Network, with English dubbing. However, on August 27, 1979, the show was banned by then-President Ferdinand Marcos, citing “harmful effects on children,” with four remaining episodes being unaired. After the 1986 People Power Revolution, in which Marcos was removed from office, the anime went back on Philippine television and was re-aired from the 1980s to the 2010s.