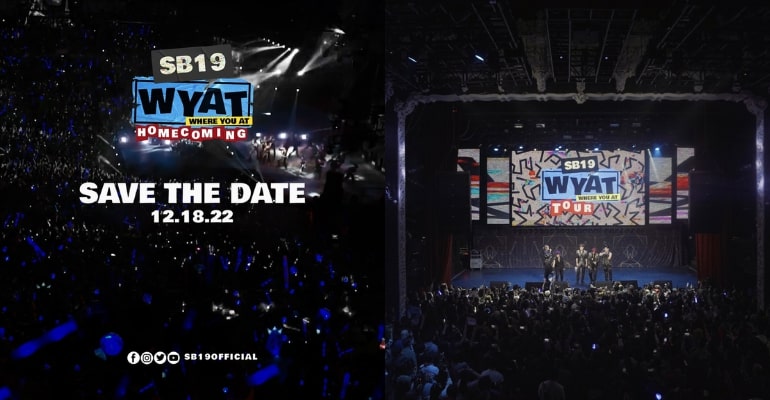 MANILA, PHILIPPINES — On November 14, Monday, P-pop supergroup SB19 announced they will be holding a homecoming show in Manila for their WYAT (Where You At) world tour on December 18.

“MANILA, we’re back to celebrate the finale of the WYAT Tour 2022 and another year with A’TIN,” the post read.

They have yet to announce additional details, such as the venue and ticket prices of the homecoming show.

Previously, SB19 kicked off WYAT Tour in September. It is currenly their most extensive tour, both local and international.

The P-pop group held its show in Cebu, Clark, Davao, and Quezon City in the Philippines. Meanwhile, their international shows include Dubai, New York, Los Angeles, San Francisco, and Singapore.

The boys are scheduled to perform in San Francisco and Singapore this coming November 18 and 19, respectively.

Other than the concert tours, SB19 also recently made their US television debut on Good Day New York and visited the Philippine Consulate General in New York.

This year, the boy group made it to the “Favorite Boy Bands of All Time” list of Teen Vogue.

In October, the group celebrated its fourth anniversary. The boys promised something special to Pinoy A’TIN before flying for the first WYAT leg in Dubai.

“We’ve been together for four years, who would have thought! The universe really transpired for us to meet and experience this incredible journey together. Let’s enjoy the ride, A’TIN! Thank you, forever,” they posted.

SB19’s homecoming Manila concert is just three months after tickets to the group’s concert at the Araneta Coliseum sold-out on September 17. – WhatALife!/Zed