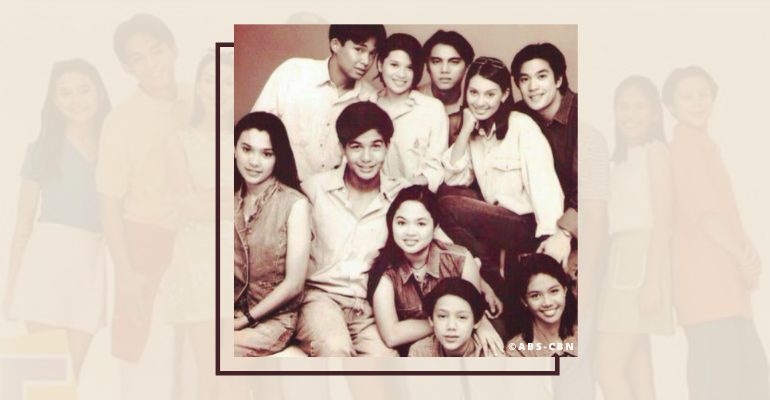 The success of the batch one artists pushed Star Magic to continue its hunt for young talents to train as the next stars in showbiz.

Batch 2 became part of the cast of the Gimik series running from 1996 to 1999, popularizing the love pairings of Jolina Magdangal and Marvin Agustin, Mylene Dizon and Bojo Molina, and Rico Yan and Judy Ann Santos.

After finishing as Star Magic’s second batch, alumna Mylene Dizon took part in the hit teen-oriented series Gimik. Her break, however, happened when she played the antagonist role of Sally Perida in the long-running series Sa Dulo Ng Walang Hanggan (2001-2003), alongside Claudine Baretto and Carlos Agassi.

Where is she now? Dizon shifted from one network station to the other and played numerous roles throughout the years. Despite now being a mother of two boys, she continues to be active in the showbiz industry, partaking in the 2021 television series Huwag Kang Mangamba as her latest project.

Like Dizon, Marvin Agustin has shifted talent management many times after his launch in Star Magic ’96. He rose to fame in the teen-oriented show Gimik and became a household name following the success of his love pairing with Jolina Magdangal. In 2004, Agustin won his first Golden Screen Entertainment TV Award after his outstanding performance in Magpakailanman: Boxing Gloves (as Filipino boxing champion Manny Pacquiao) episode.

Where is he now? He is now a successful entrepreneur and chef, occasionally appearing on tv series and films—his latest being in Second Coming and Inagaw ng Bituin, both in 2019. Agustin also pursued a directorial career, debuting in one of Magpakailanman anthalogy episode: Wilodia Story.

Carlo Aquino actually started his acting career as a child actor in the children-oriented show Ang TV (1992). However, he rose to popularity as a teen actor following his excellent performance in the 1998 film Bata, Bata… Pa’no Ka Ginawa? with veteran actress Vilma Santos and a successful participation in the teen-oriented series G-mik: Book 1 (1999), replacing the 1996 Gimik. The actor also launched a music career alongside his acting projects.

Where is he now? Approaching his 30 years in showbiz, Aquino maintains to be active in the industry with his latest appearance on 2020 TV shows La Vida Lena and A Soldier’s heart, and 2019 films Isa Pa With Feelings and Ulan. In September of last year, he also revealed his daughter with girlfriend Trina Candaza.

Diego Castro III appeared in over forty movies and dozens of television shows after his Star Magic training, and like his batchmates, joined the cast of youth-oriented show Gimik (1996).

Where is he now? Currently, Castro works as morning host on Good Morning Kuya and a news anchor for Why News under UNTV Public Service, following his late parents, who were both veteran broadcast journalists, June Keithley and Angelo Castro Jr.

Cast as one of the original members of the youth-oriented show Ang TV, Gio Alvarez has somewhat grown up in the public eye. Even before Star Magic, he was already doing projects alongside big stars. Alvarez played as young Michael de Mesa in Hihintayin Kita Sa Langit (1991), starring veteran stars Richard Gomez and Dawn Zulueta. Moreover, he played one of the sons of the King of Comedy Dolphy in the hit tv series Home Along Da Riles (1992-2003). More acting projects came to his ways after that, and even up until the present, Alvarez remains active.

Where is he now? As mentioned, he continues to maintain his acting career with his latest project, the 2021 TV series Babawiin Ko Ang Lahat, starring Pauline Mendoza. Talking about his private life, Alvarez is now a father to four girls and one boy, his eldest being 25 living in Las Vegas and youngest at age 2.

With the influence of his older sister, Cheska, Patrick joined showbiz at the age of 13. His remarkable performance in the 1994 Philippine film Separada cemented his celebrity status. He later joined the cast of Gimik; Araw-Araw, Gabi-Gabi; Asero, among others, and received his first Best Child Actor award at the 1996 FAMAS for his acting in Madrasta (1996) and more awards for the movie Batang PX in 1997. After that, Patrick worked on several more projects before being relaunched as a member of Star Circle Batch 2.

Where is he now? In 2008, Garcia left the country to pursue studies in directing at New York University. However, nothing came of his plans, and he eventually returned home for his sister’s wedding. Despite dating fellow actress Jennylyn Mercado and having a son together, their relationship didn’t last long. Garcia married his non-showbiz girlfriend in 2015, and together they had three daughters and one son.

RELATED: Filipino heartthrobs who stole the hearts of the 90s teens

The original Multimedia Superstar of the 90s and the Queen of Pinoy Pop Culture, Jolina Magdangal already had a booming and buzzing career even before joining Star Circle (1996). She entered showbiz as a member of composer Ryan Cayabyab’s singing group. She eventually released her own album under Walt Disney Records and later recorded tons of movie theme songs, earning her the ‘soundtrack queen’ moniker. Aside from her music career, Magdangal also had a fruitful acting career, appearing in numerous television programs in different genres, and becoming one of the original teleserye leading ladies in the country.

In addition, she also pioneered the romantic-comedy genre in Philippine television in Labs Ko Si Bebe (1999), I Luv NY (2006), and Adik Sa’yo (2009), along with co-star Marvin Agustin.

Where is she now? Magdangal took a long hiatus as her buzzing career dwindled in the early 2010s. However, she’s still made appearances occasional appearances on variety and talk shows. She released eight albums and appeared on numerous television shows, commercials, and films throughout her career. Magdangal made a comeback in the 2021 film Momshies! Ang Soul Mo’y Akin!, a collaboration with her Magandang Buhay co-hosts Karla Estrada and Melai Cantiveros. While many were looking forward to Magdangal ending up with her longtime love team, Agustin, she eventually married Rivermaya’s drummer Mark Escueta, and together, they have two children.

Stefano Mori rose to fame as one of the members of the teenage band JCS, together with Carlo Aquino and John Prats. With his singing career, coupled with his acting projects, Mori became one of the sought-after heartthrobs in the 90s.

Where is he now? In 2002, the former child actor reportedly decided to leave the entertainment industry to return to Italy for an undisclosed reason. In a video uploaded by The Pinoy Channel on YouTube, Mori owns a famous Italian restaurant with several branches established worldwide, including Palawan and Italy, to name a few.

Diether Ocampo started his career as a dancer in the 90s before ABS-CBN discovered him. Following his success in Star Circle, he played several more roles before landing in a love pairing with actress Kristine Hermosa in tv series ‘Til Death Do Us Part (2005-2007) and Palimos ng Pag-ibig (2006).

Where is he now? Currently, Diether is serving in the Philippine Coast Guard Auxiliary as a Lieutenant Commander.

Filipina-American actress Angelica Panganiban is known for her acting and her TV hosting, and comedienne skits. Like most of her Star Circle batchmates, Panganiban started her career at age 6. Her iconic film appearances include Antipolo Massacre (1994), Separada (1994), Sarah… Ang Munting Prinsesa (1995), Ama, Ina, Anak (1996), among many others. She earned numerous awards, including Best Child Actress awards and nominations in the FAMAS Awards and PMPC Star Awards.

Where is she now? Panganiban remains active in showbiz and is approaching her third decade. However, she announced that her 2021 series Walang Hanggang Paalam would be her last television drama as she will retire from teleseryes. She clarified, though, that she would not leave her homegrown network and acting altogether.

You might have heard about Camille Prats as she starred in the titular protagonist of the Philippine adaptation of A Little Princess, Sarah… Ang Munting Prinsesa, in 1995. She grew up in front of millions of Filipinos, appearing in sitcoms and teen-oriented dramas. In 2007, she took a break from the limelight to complete her studies in the States. The following year, Camille married AMA Makati and founder of Wheels Auto Performance Anthony Linsangan in a civil wedding in Los Angeles and had a son. Unfortunately, Linsangan died in 2011 due to cancer. In 2017, she got remarried to a businessman in Batangas and had her second child.

Where is she now? After returning to the Philippines, Camille continued to be active in showbiz, occasionally appearing on various shows, interviews, television series, and rarely on films. You can watch the actress in GMA Network’s kids show Makulay Ang Buhay.

John Prats is the older brother of Camille, who is also a former member of the JCS boy band with Carlo Aquino and Stefano Mori. Like his sister, John also began his career in showbiz at an early age. After his success in Star Circle, he continued to grow as an actor and eventually got paired with Heart Evangelista on the show G-mik Trip (1999), Ang Tanging Ina (2003), My First Romance (2003), and Berks (2002). At the height of their loveteam, the pair won the Most Popular Loveteams of RP movies during the 33rd Guillermo Mendoza Memorial Scholarship Foundation.

Where is he now? John married fellow celebrity Isabel Oli in 2014, and since then, he came in and out of the showbiz industry to balance work and family life. His latest TV appearance was on Pinoy Big Brother: Otso (2018) as a celebrity judge and 3pol Trobol: Huli Ka Balbon! (2019) starring Coco Martin, Jennylyn Mercado, and Ai-Ai delas Alas.

You Might Also Want To Read: New Shows Alert on Netflix Philippines in November 2021