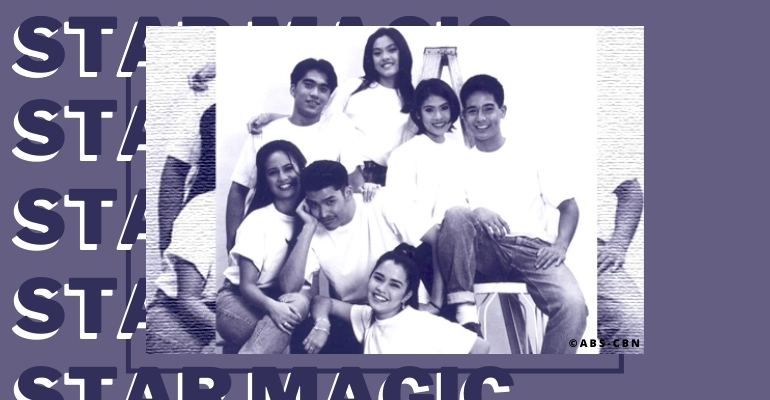 Artists Nikka Valencia, G.Toengi, Victor Neri were among the first batch of the Star Magic talents

Star Magic (formerly ABS-CBN Talent Center) is the training and management subsidiary of ABS-CBN Corporation, designed to train young talents in the Philippines, including their acting, personality development, and physical enhancement before being cast in televisions shows and films.

Wanting to establish a stable platform for aspiring stars exclusively for the network, then ABS-CBN executive vice president and general manager Freddie Garcia founded Talent Center together with then program director Johnny Manahan. During its early years, the Talent Center’s project was Ang TV, where stars such as Paolo Contis, Jolina Magdangal, and Claudine Baretto gained popularity.

Thousands of aspirants joined the audition, but only a few dozens were able to join the program. As a result, the Talent Center continued its search through the launching vehicle Star Circle in 1995.

Listed below are the first-ever batch and their whereabouts nearly three decades later.

Nikka Valencia is Batch 1’s alumna. Born Sharon Rosenfeld, she first appeared on television as one of the 1993 Ang TV cast. That same year, she played the sister of Aga Mulach’s character in the film May Minamahal. Her latest on-screen appearance was in the 2019 film The Annulment starring Lovi Poe, Joem Bascon, and Myrtle Sarrosa. At present, you can find her active on TikTok (@Medyonikka_ano) doing dance hoops.

Cholo Escaño is an actor known for Sana’y Wala Nang Wakas (2003), Magic Temple (1996), and Hataw Na (1995). He also stepped into the music industry and was last spotted doing gigs with his Voice Unlimited partner Niño Alejandro in 2013.

Jacqui Manzano shortly joined showbiz before marrying Palibhasa Lalaki co-star Anjo Yllana in 1996. Their marriage didn’t last long, however. The pair were rumored to have split up in 2008. Then in 2014, despite reconciliation, Manzano and Yllana finally ended their marriage shortly after. The couple has four kids.

Aside from being an actress, Maricel Morales was also crowned Mutya Ng Pilipinas in 1995 and represented the country in the Miss Asia-Pacific Beauty Pageant, where she became one of the 12 finalists. She later became the representative to the Mrs. World Pageant 2001, finishing first runner-up. She last appeared on the Filipino remake Encounter (2021) and the 2013 film 100 Tula Para Kay Elisa.

Victor Neri became one of the prominent action stars in the industry following his appearance on Ang TV. He starred in various action films including Iskalawag: Batas ay Batas, Amanos (Patas ang Laban), Notoryus, Tigasin, Suspek , and Ex-con. In 2006, he took a break from showbiz to pursue a career in culinary arts and became a professional chef. Stepping back into the limelight, Neri starred in numerous projects, including BuyBust (2018), Wild Little Love (2019), and Beautiful Justice (2019), to name a few.

Giselle Toengi is a half-Swiss, half-Filipina actress, dancer, singer, host, VJ, and model. Following her discovery and training in Star Circle, Toengi left a thriving career to try her luck in Hollywood. She landed a role in Saved by the Bell: The Musical and the 2004 stage play Days When Cocaine Was King. In 2014, Toengi replaced Jannelle So as host and producer of Kababayan Today, which airs on KSCI (LA-18). Her last known project in the country was the 2018 film First Love, starring Aga Mulach and Bea Alonzo.

Regine Tolentino became the first Filipino VJ of MTV Asia (1997) after her debut in Star Magic. Since appearing both on television and in movies, she has been very active as an actress, TV host, and professional dancer, earning her the Dance Diva moniker. Aside from managing her business and working as a social media influencer, Tolentino also teaches dance and Zumba classes.

Nothing is significantly known about Christine Young except she was part of the first batch of the Star Magic talents.

Before his unexpected death, Rico Yan was a widely known matinee idol, model, and actor. He started as a commercial model and eventually became an actor. Yan became a household name after playing the roles of Ricky Salveron in Gimik (1996) and Gabriel Maglayon in Mula Sa Puso (1997). Since then, he worked on several more shows and had successful pairings with Judy Ann Santos and Claudine Baretto. Aside from his showbiz career, Yan also acted as the first official youth spokesman for the Department of Education Culture and Sports in 1998 and opened several businesses across the country.

Sadly, he suffered cardiac arrest in his sleep due to acute hemorrhagic pancreatitis and passed away at age 27.