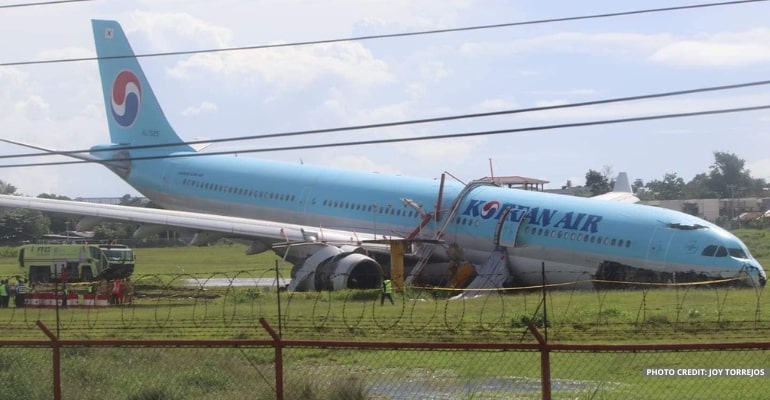 CEBU, PHILIPPINES — On Sunday, October 23, a Korean Air Lines Co Ltd Airbus overshot the runway while trying to land at the Mactan-Cebu International Airport. Airbus A330-322 HL7525 held 173 people on board.

On Monday, October 24, Korean Air said in a statement that the Airbus SE A330 widebody flying from Seoul, South Korea to Cebu, Philippines, had tried to land twice in poor weather at Mactan-Cebu International Airport after what appears to have been an uneventful flight.

At 23:07 local time, the Airbus A330 made it and overran the runway on the third attempt.

Early reports from the scene did not mention any casualties, while the airline said in their statement that there were no passenger injuries and all of them had safely evacuated.

“Passengers have been escorted to three local hotels, and an alternative flight is being arranged,” the airline said of flight KE361. “We are currently identifying the cause of the incident.”

On the airline’s website, Korean Air President Keehong Woo issued a letter of apology regarding the flight. In addition, he promised that they would cooperate with local aviation authorities and Korean authorities to perform a thorough investigation on the case to determine the cause of the error.

“We remain committed to standing behind our promise of safe operations and will do our very best to institute measures to prevent its recurrence,” Woo said.

Photos about the incident emerged on social media. Unverified images from the scene showed widespread damage to the plane’s body while the nose landing gear seemed to have collapsed entirely.

The Mactan-Cebu International Airport Authority reported that their runway was temporarily closed. Many flights have been delayed as a result. – WhatALife!/Zed