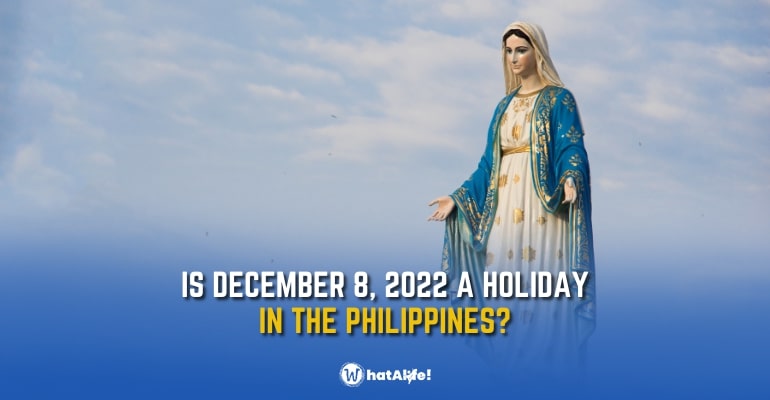 Is December 8, 2022 a holiday in the Philippines? Find out below!

MANILA, PHILIPPINES — The first holiday of the last month of the year is scheduled on December 8, 2022, also known as the Feast of the Immaculate Conception of Mary.

The Feast of the Immaculate Conception of Mary is a Special Non-Working Day declared by former president Rodrigo Roa Duterte last October 29, 2021, through Proclamation No. 1236.

This religious holiday commemorates the Principal Patroness of the Philippines — Mary. It was first declared as a Special Non-Working Holiday through Republic Act. No. 10966, approved on December 28, 2017, by former president Duterte.

The bill was authored by Ilocos Norte Representative Rodolfo Fariñas and approved on the third and final reading by the House of Representatives on November 2017.

Feast of the Immaculate Conception of Mary: Understanding the religious holiday

Also known as Immaculate Conception Day, December 8 marks the day the Virgin Mary is conceived in the womb of her mother, Saint Anne.

It is considered one of the most important celebrations in the Roman Catholic Church’s Liturgical Year, so much so that it is also known as the “Holy Day of Obligation.”

The religious holiday is celebrated by processions, parades, and feasts to honor the Virgin Mary.

The remaining holidays in 2022

The year 2022 will end in less than two months. The following are the remaining holidays declared this year: