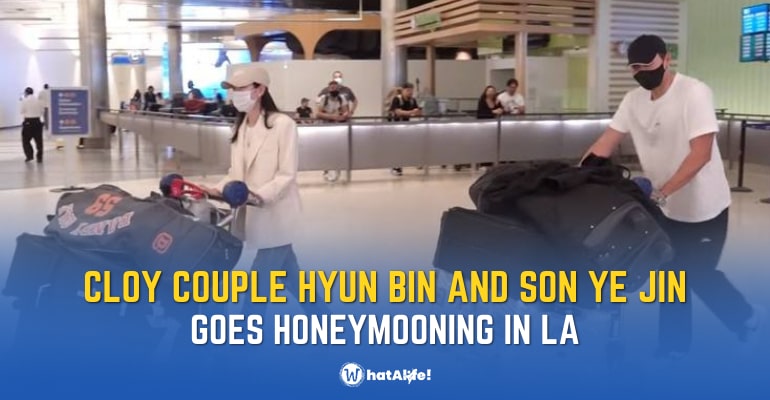 The newlywed and well-known Korean star couple Hyun Bin and Son Ye-jin are having their honeymoon in the city of Los Angeles after their private wedding ceremony on March 31 this year at Aston House of the Grand Walkerhill Seoul hotel in South Korea.

On Tuesday, April 11, reports are spreading on social media that they are at the Incheon Airport for their departure to their honeymoon city.

They reportedly tried to have a low-key presence at the airport by arriving separately.

After their flight from South Korea, they received a warm welcome from their fans at the Los Angeles International Airport on the same day of their departure, who asked for photos and gave presents to the couple.

Dispatch, a Korean media outlet, also uploaded a video showing the couple pushing their carts, each packed with a golf travel bag. According to them, the couple will spend two weeks in the city to bond with friends.

VAST Entertainment, their agency, released their official wedding photos on the day of their honeymoon flight.

“This is VAST Entertainment. Actors Hyun Bin and Son Ye-jin finished their wedding on the 31st with your support and blessings. Thank you again for your support.”

In early 2019, actor Hyun Bin and actress Son Ye-jin were spotted together in Los Angeles, the beginning of speculation that the two were dating. A netizen also uploaded photos of the two shopping in a supermarket during their stay in the city.

They co-starred in the 2018 film “The Negotiation” and hit drama “Crash Landing on You,” which ran from December 2019 to February 2020. After nearly a year, they admitted they were a couple on January 1, 2021, when Dispatch published photos of the two together. – WhatALife!