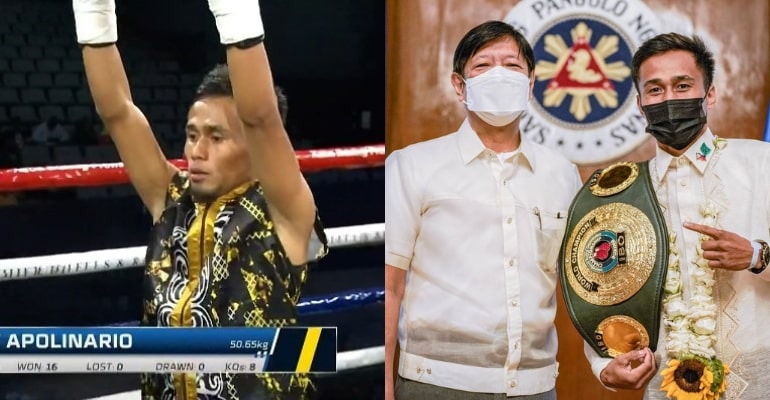 The Maasin, Sarangani native, knocked Buthelezi to the ground with a right straight to the body and a left hook to the jaw, giving him his most significant career victory.

Buthelezi, a three-division world boxing champion, continued to attempt to rise but was unable to do so before Apolinario was officially declared the victor.

For Filipino boxing fans, Buthelezi is a well-known name. Edrin Dapudong, Ryan Rey Pontreras, Julius Alcos, and Ronlle Ferreras were among the Filipino boxers he had defeated.

Ben Mananquil did not suffer the same fate as Apolinario in the co-main event. For the WBA Intercontinental super flyweight title, he was defeated by African Phumelele Cafu in the fifth round by stoppage.

Before the South African boxer received his much-needed break in the fifth round to stop Mananquil, both fighters were intensely involved in the first four rounds.

Mananquil’s boxing record suffered a setback with the defeat, dropping to 18-3-3 with five stoppage victories, while Cafu’s record rose to 6-0-3 with all knockout victories.

The President praised the boxing champion’s accomplishment, which gave Filipinos pride worldwide. He points to 17 victories with 0 losses and 12 knockouts.

President Marcos Jr. received a pair of signature gloves from the “Dobermann,” who also received from the President a commemorative gold coin and another set of signed gloves for Dave Apolinario.

Here’s the short clip of the courtesy call: