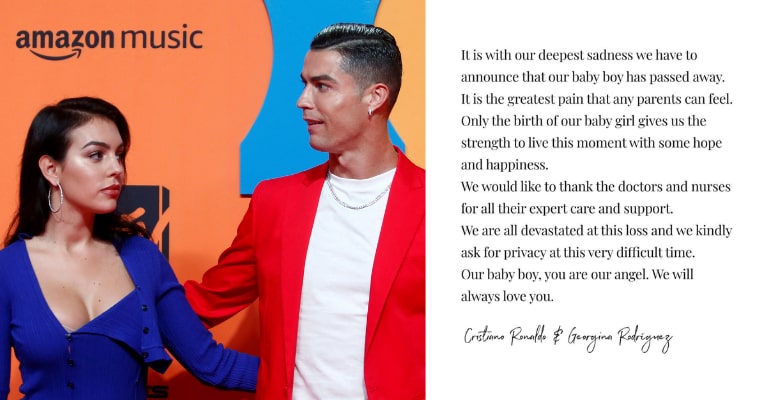 Cristiano Ronaldo, Portuguese football player known to be one of the greatest players in the sport of his generation, recently announced the death of his newborn son on April 19 through his official Instagram account.

On October 28, 2021, Ronaldo took to social media to reveal that he and his partner Georgina Rodriguez were expecting twins.

However, the famous player confirmed that only the baby girl survived.

Ronaldo posted a picture of an English translation of his caption.

“It is with our deepest sadness we have to announce that our baby boy has passed away. It is the greatest pain that any parents can feel,” said in a jointly-signed statement from Ronaldo and Rodriguez.

The couple mentioned their source of strength during the difficult time and thanked the people behind the care and support of the medical experts.

“Only the birth of our baby girl gives us the strength to live this moment with some hope and happiness. We would like to thank the doctors and nurses for all their expert care and support.”

They are also asking for privacy as they are all devastated by the loss of their baby boy.

“We are all devastated at this loss and we kindly ask for privacy at this very difficult time.”

The statement ended with a message for their son.

“Our baby boy, you are our angel. We will always love you.”

The Manchester United Football Club gave their sympathy and support as they tweeted on their official Twitter account saying,

Also read: Britney Spears announces her third pregnancy: “I am having a baby.”