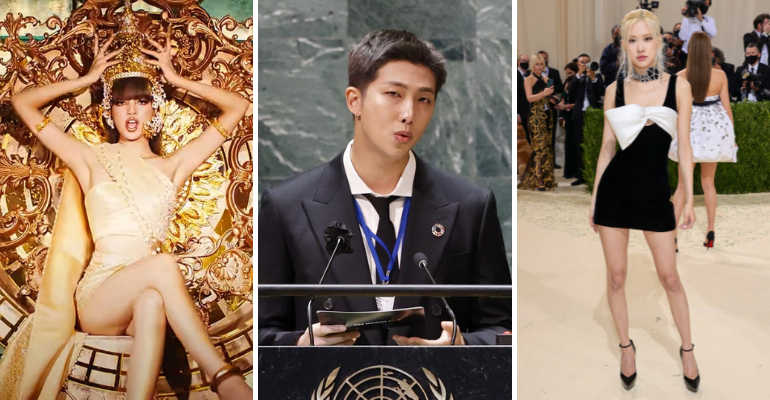 For many, it’s been a long, challenging year filled with struggle and stress, and fear over the looming threat of the Coronavirus. But for some, it has been a year of giving all the way! Yes, we’re talking about the K-Pop industry! Lately, more and more people have gotten hooked on K-Pop and the idols helming it due to its popularity! So, as we prepare to turn the page to Chapter 2022, let’s take a look back at the most hype K-Pop moments of this year!

Since November 2020, when aespa debuted and dropped their single, ‘Black Mamba,’ the girl group had to take a break. However, in October 2021, aespa dropped their mini-album, Savage. Not only that but there were over 401,088 stock pre-orders early on!

The group was shocked, considering that the group hadn’t been active for very long. Also, one member, Winter, stated, “I was surprised and happy to receive such overwhelming interest even though we’re just rookies who haven’t debuted that long ago.” And that’s the real power of loyal fans!

Check out their fittingly savage music video below.

‘Butter’ & ‘Permission to Dance’ by BTS

The famed K-Pop boy group BTS blazed trails to the Billboard Hot 100, and better yet, it was atheir English-language single ‘Butter’ that reigned for over eight weeks on the Hot 100 — at Number 1! The song itself is praised for being as slick and smooth as its namesake.

And not to be complacent, the boys hammered in another nail by the name of ‘Permission to Dance!’ On its own, the songs could be written off as pop song fun. But, combined with the Coronavirus pandemic, it’s no wonder that the song debuted at Number 1 upon release, with fans seeing the brighter side of life thanks to it!

‘Butter’ garnered 11.042 million streams on music streaming services on its first day alone. It ended up earning BTS a Guinness World Record! For ‘Permission to Dance,’ fans cranked it up to 15.9 million streams! In these challenging times, the boy group truly uplifted the hearts of their listeners worldwide — and the listeners repaid them in kind.

Not to be confused with the type of wine, Rosé, from the girl group BLACKPINK, made her solo debut in March of 2021! She released the album R and ‘On the Ground,’ an English-language song! With her breakout solo career, she also broke a couple of records! Let’s start the list, shall we?

Here’s another BLACKPINK member that’s gone off to start a solo career! Intensely charged and highly-anticipated, Lisa’s solo career launched in September 2021. Fans received her first solo singles like meteors from the night sky! If you haven’t seen Lisa’s videos for ‘Money’ and ‘Lalisa,’ are you even a participating member of society? Never mind, regardless of whether you’ve seen it or not, get to know Lisa below.

Lisa showed off her dancing chops for her first two solo singles, cementing her status as a star! She indeed proved her strengths as a performer. Singing, dancing, rapping, she has it all! And her concepts are no slouch, especially those from the ‘Lalisa’ MV! It was an outright feast for the eyes!

Before, the K-Pop industry aimed to cater to Asian audiences. TWICE, in particular, focused on Japan, and of course, Korea. But upon seeing the reception of global fans from areas outside of the two countries, they wanted to give a little nod to those fans.

The nod in question was their single, ‘The Feels.’ With BTS making waves and others dipping toes into the English-language scene, TWICE dropped ‘The Feels!’ The bop talks about having “the feels” for someone — a universal (ahem) feeling.

‘The Feels’ appeared on the 83rd spot of the Billboard Hot 100, the very first of TWICE’s discography to do so! The song also appeared on several other music charts. ‘The Feels’ was also streamed 4.7 million times in its first week alone!

Of the many superstar friendship combos, a few were pleasantly surprised by the one between Ryan Reynolds and Bang Chan. Can we talk about the performance for a second? (This isn’t a question.) The whole shebang opens up with so many nods to the first Deadpool film from 2016 that it’s a headbanging session. And that’s even before the boys start up the mashup of their song ‘God’s Menu’ with BLACKPINK’s ‘DDU-DU DDU-DU.’

The Deadpool star found the performance not long after one Twitter user posted a video splicing Bang Chan’s opening lines with the scene in the film it was based on. So Reynolds autographed an Aviation Gin bottle — from his own business — for Bang Chan, calling the latter his New Favorite Australian.

First, I have your autograph right here, Bang Chan. Will send to you this week.

BTS at the United Nations

Yeah, your pop star has millions of views on their YouTube music videos, but have they ever attended the United Nations General Assembly as ambassadors for Youth and Culture? Well, that’s what happened to BTS! Owing to the group’s outstanding contributions to spreading Korean culture, Korean President Moon Jae-in made BTS his Special Presidential Envoy, specifically for Future Generations and Culture!”

Armed with diplomatic passports from their own President, BTS accompanied President Moon to the 76th United Nations General Assembly. They performed ‘Permission to Dance’ for the attendees and gave a speech! With this, BTS is counted among the ranks of high-profile artists who have performed at the United Nations assembly. Notably, those ranks include Beyoncé and Shakira!

Rosé at the Met Gala!

While not as flashy as several other attendees (looking at you, Kim Petras and Iman), Rosé attended the Met Gala! Yes, you heard right, Rosé was at the Met Ball! She was one of the first Korean Popstars to attend the illustrious event alongside CL. The K-Pop soloist rocked a Yves Saint Laurent little black dress with an oversized bow at the front. Fitting (pun intended), considering she’s the brand’s ambassador!

Not only that, her date to the event was Saint Laurent’s creative director Anthony Vaccarello! Rosé and Vaccarello shared many adorable moments on the red carpet, cementing the fantastic relationship between the K-Pop star and the brand.

From the name alone, it makes you wish you were there! The World K-pop Concert: BIT 4U Concert happened on November 14. Around 3,000 fans attended the event held in Goyang’s Korea International Exhibition Center (KINTEXT). While Korea is famed for holding up against the Coronavirus better than other countries, there were a lot of protocols to follow. Attendees had to be fully vaxxed or tested negative for the virus. Also, they had to follow social distancing, use plastic gloves, and finally, not sing throughout the concert.

Still, the concert on its own was a marvel! After all, it was the first large-scale indoor music event in almost two years! The acts that were present for helping ease people back into the old normal included NCT Dream, Loco, Pentagon, Key from SHINee, and aespa!

The princes of K-Pop returned with their single ‘Don’t Call Me.’ Giving the boys a darker edge, it’s the triumphant comeback of a group that’s been around for longer than the seven-year curse! Previously, the group had to stop their roll for a bit due to mandatory military service.

Still, SHINee has been active for over 13 years, and not to mention, still relevant! They owe this to their willingness to break new ground and explore new things. Indeed this quality of theirs is reflected in the other tracks!

You Might Also Want To Read: Here are 20 Filipino celebrities who got married in 2021