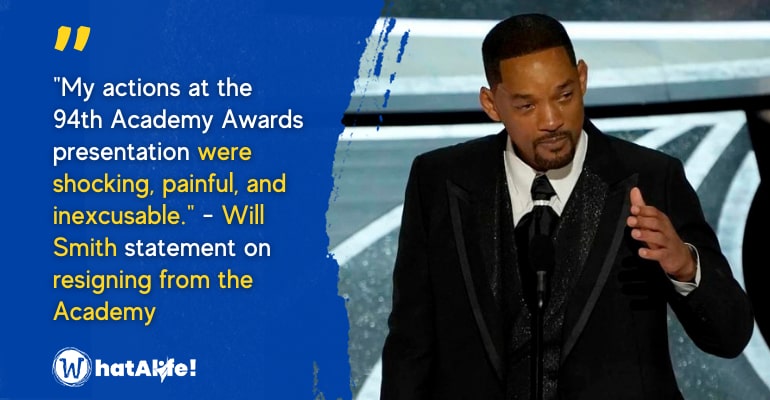 Will Smith stated in a statement Friday that he has resigned from the Academy of Motion Picture Arts and Sciences after slapping Chris Rock on stage during the Academy Awards.

“My actions at the 94th Academy Awards presentation were shocking, painful, and inexcusable. The list of those I have hurt is long and includes Chris, his family, many of my dear friends and loved ones, all those in attendance, and global audiences at home,” Smith said in a statement.

“Change takes time and I am committed to doing the work to ensure that I never again allow violence to overtake reason,” he added.

Smith publicly apologized to Rock the next day via social media.

The Academy announced on Wednesday that it has “started disciplinary proceedings” against Smith following the humiliating incident at the Oscars on Sunday night.

Academy president David Rubin replied to his resignation, stating in a statement, “We have received and accepted Mr. Will Smith’s immediate resignation from the Academy of Motion Picture Arts and Sciences. We will continue to move forward with our disciplinary proceedings against Mr. Smith for violations of the Academy’s Standards of Conduct, in advance of our next scheduled board meeting on April 18.”

Smith’s resignation comes only days after the Academy announced it had opened a formal investigation into his actions, which includes “inappropriate physical contact, abusive or threatening behavior, and compromising the Academy’s integrity.”

Though it’s probable that the Academy may revoke his Oscar for “King Richard” soon after the slap, Whoopi Goldberg, a member of the Academy’s Board of Governors, has stated that the award will not be revoked. – WhatALife!

Also Read: Will Smith apologizes to Chris Rock for slapping incident at Oscars