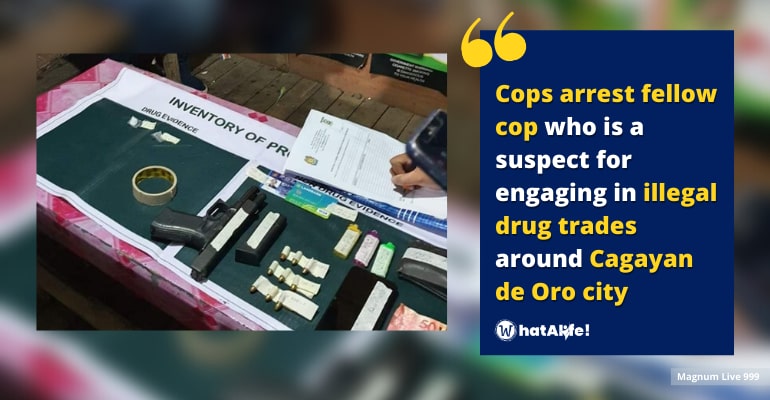 According to CIU chief Lt. Col. Jophet Paglinawan, the suspect was engaged in illegal drug trades in several parts of the city.

“He is one of those spearheading the illegal drug trade in the villages of Agusan, Balubal and Puerto,” Paglinawan said.

Authorities discovered one sachet carrying suspected shabu and another sachet containing traces of the prohibited substance in the suspect’s wallet. They also found a Glock 9mm pistol supplied by the Philippine National Police (PNP), one Glock 9mm magazine, nine pieces of ammo for the gun, and drug paraphernalia.

Lt. Col. Michelle Olaivar, a spokesperson for the Police Regional Office of Northern Mindanao, stated that the PNP has an Integrity Monitoring Enforcement Group that is in charge of tracking police officers who have been suspected to be engaging in criminal activities.

“However, despite this kind of monitoring, there are still police officers who are wasting the opportunity to be able to serve,” Olaivar said.

She noted that the suspect’s direct supervisor would be investigated as well.