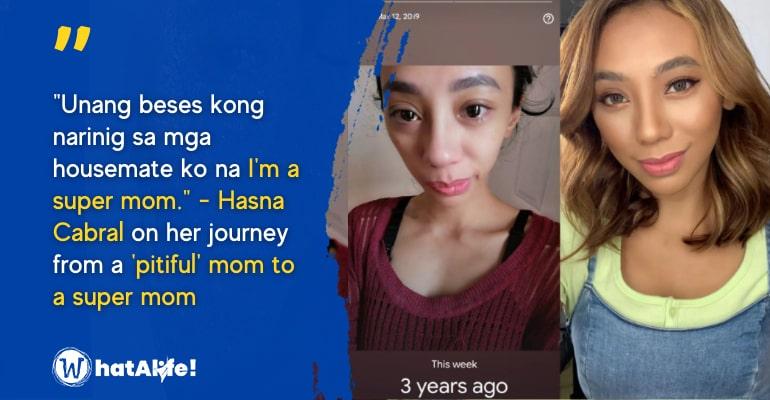 Who is the widely talked about and controversial Filipina?

Hasna Cabral is a renowned Filipina actress in the Philippines. She was born on February 10, 1989 in the province of Cavite. The actress is currently 33 years old and was an adult housemate in the fourth batch of Pinoy Big Brother season 8, a well-known reality TV show.

Hasna was featured on one of Toni Gonzaga’s YouTube Channel called ‘Toni Talks’. She told her story of becoming a mother at an early age.

The actress was 20 when she had her first child, a girl, and then soon followed a boy. Hasna also shared her experiences and trajectories as a single mother of two children, Bash and Baste with special needs.

The former housemate had experienced three relationships, which unfortunately, were failures. The first two were the fathers of each of her children. Her relationships with them did not work out due to financial and third-party issues.

The last one, however, was a bit serious since they decided to get married during their time together. Sadly, they separated 10 months after their marriage. According to Hasna, their marriage was only out of pity.

(His realization after we got married is that he was just pitiful towards us.)

It was at that point that Hasna Cabral attempted to kill herself and her children to end all their suffering. However, she decided against it, realizing that it will be her greatest regret.

After her renewed trust in life, she was called by PBB to inform her she was accepted to be an official housemate.

From then on, a better life has found its way to her. Although she didn’t make it to the top in PBB because she got evicted, a lot of doors and opportunities have opened in return.

After the show, many producers and directors were eager to cast Hasna Cabral as an actress in their movies and TV series.

Her dream of becoming an actress became true when her show Hush premiered on TV in 2020. She portrayed the character of Agnes.

In the same year, she also signed the movie Good Times Bad in which she was the lead actress together with actors Jal Galang and Joel Garcia.

Hasna Cabral is not just active in the entertainment industry. She also makes back-to-back performances in different shows. She does TV commercials and model fashion shoots. This allows her to raise a large number of her fan following and income. In fact, various Filipino magazines have her on the cover of their publications.

On June 26, 2020, Hasna appeared on the cover page of Village Pipol Magazine, a print and online publication in the country. She has shared that “I am an Ally” which means she has united herself to help other people. The actress once stated that she was raised in a society where one’s gender identity defined everything.

But she strongly disagrees with that idea and really believes that everyone is equal. Hasna wishes to remain above all forms of discrimination based on race, sexual orientation, gender, and background.

“Regardless of color, sexuality, gender, and background, we are all more than capable of showing each other the change we’d like to see in the world. It is never too late to make a change; it won’t be easy, but it can be done”, she said.

As of now, Hasna has decided to focus and enjoy being an actress and a supermom to her two adorable children.

Fun facts about her: She is 5 feet and 4 inches tall. Her zodiac sign is Aquarius. Her favorite color is yellow.

She also loves cycling and swimming. Hasna sometimes wears eyeglasses as her eyesight is weak, that’s why she is often seen wearing contact lenses whenever she appears on a show, interview, etc. – WhatALife!