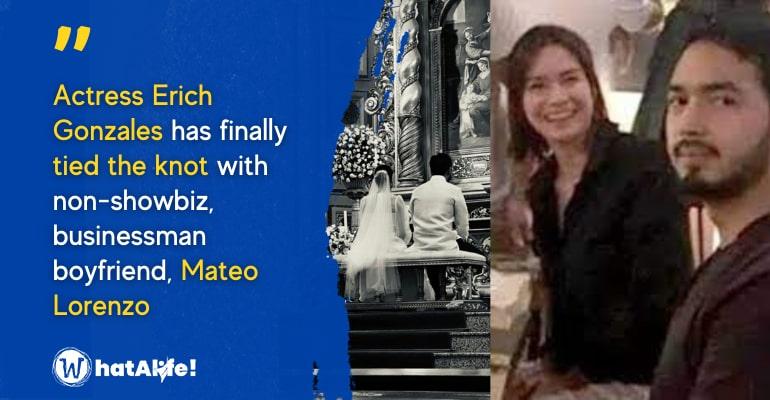 Erich Gonzales, a Kapamilya actress, and her non-showbiz boyfriend, now husband Mateo Rafael Lorenzo, became the talk of the town after photos of their wedding banns went viral on all social media platforms.

Marriage banns are public announcements made by the church when two people marry. This is done to give anyone who wishes to file a legal objection to the marriage the opportunity to do so.

Just about yesterday, March 23, 2022, the couple made a buzz on social media again when one of Mateo’s siblings posted a now-deleted Instagram story showing a photo of the couple in-front of the altar wearing a wedding gown and barong. This made people speculate that the two finally tied the knot. Eventually, News5 confirmed the marriage via a post on Facebook.

Erich first revealed that she was dating someone in March 2018, and she confirmed that she already has a boyfriend in July of that year.

Who is Mateo Lorenzo?

Mateo Rafael Lorenzo is the son of business tycoon Martin Ignacio Lorenzo and Maria Leah De Leon. According to his Facebook account, he is 30 years old and was born on November 17, 1991.

His father used to own Pancake House and Del Monte Philippines.

Mateo has 11 siblings, namely: Diego, Lucas, Maria, Santiago, Basti, MJ, Paola, Andres, Agustin, Julia, and Angelo. They all grew up in a household without a stay-in help because their parents believed that parents are the most important thing a child needs.

“Many people don’t understand that the most important thing a child needs is an anchor, the parents just have to be there—they need to know that you’re there whenever they need you. But you also always have to watch from a distance because you have to give them enough space to move but not enough rope to hang themselves” the business tycoon said.

Mateo graduated Management Engineering at the Ateneo de Manila University in 2014 following in the footsteps of his father, who graduated with the same degree from Ateneo in 1986.

In 2021, he graduated from the University of Pennsylvania’s Wharton Graduate School with a master’s degree in Business Administration.

Like his father, Mateo is also into the world of business. He is said to be one of the managing partners of the private equity firm Sierra Madre.

He has also been a member of the CAT board of directors/officers since 2014. This is according to a Securities and Exchange Commission form posted on CAT’s official website, LuisitaSugar.com.

Mateo rose to become one of many successful businessmen while still in his twenties. He has established a name for himself in the business world.

He also chose to keep his Instagram account private following reports about his relationship with Erich. The actress once said and claimed that she is happy with her love life and that she doesn’t want to ruin it. They both want to keep a low-key relationship. – WhatALife!