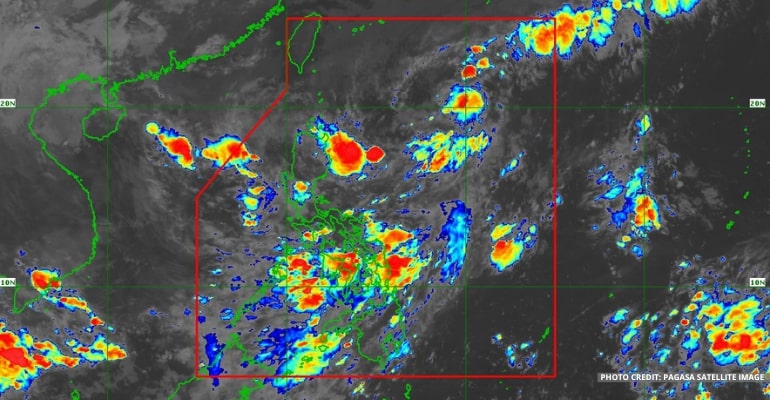 WEATHER UPDATE — According to the Philippine Atmospheric, Geophysical, and Astronomical Services Administration (Pagasa), Tropical Depression OBET still has no direct effect on any part of the country. However, the shear line continues to affect the whole of Northern Luzon.

Tropical Depression OBET is now located 815 km East of Extreme Northern Luzon (20.5°N, 129.8°E) with maximum sustained winds of 45 km per hour near the center and gustiness of up to 55 km per hour. It is moving West Southwestward at 15 km per hour.

The Tropical Depression is forecasted to move West Southwestward until tomorrow afternoon and, for the remainder of the forecast period, will generally move Westward or West Northwestward toward Northern Luzon or the Luzon Strait.

Between Friday evening and Saturday morning, Bagyong OBET may traverse the Extreme Northern Luzon area or the northern portion of mainland Northern Luzon. This is the peak when the country will experience the most from the effects of Bagyong OBET. By late Friday or early Saturday, the TD (Tropical Depression) is expected to slowly grow stronger into a Tropical Storm category.

In addition, further intensification is likely once OBET reaches the West Philippine Sea.

Due to the TD, Babuyan Islands, Ilocos Norte, Apayao, and the northern portion of mainland Cagayan may expect moderate to heavy with, at times, intense rains from Friday morning to Saturday morning.

Meanwhile, Batanes, the northern portion of Ilocos Sur, Abra, Kalinga, and the rest of mainland Cagayan may experience light to moderate with, at times, heavy rains.

The shear line is expected to bring, at times, heavy rains to Batanes, Cagayan, including Babuyan Islands, Apayo, and Ilocos Norte in the next 24 hours.

This morning, Tropical Cyclone Wind Signal #1 has been hoisted for some areas in Northern Luzon, including:

The highest possible wind signal due to the passage of OBET is Wind Signal No. 2.

The shear line continues to affect the northern portion of Northern Luzon and will bring, at times, heavy rain to affected areas throughout the day.

In the next 24 hours, the prevailing northeasterly surface wind flow will bring strong to gale-force winds over Batanes, Babuyan Islands, and the northern portions of mainland Cagayan, Apayao, and Ilocos Norte.

Metro Manila and the rest of the country will have fair weather conditions, except for rain showers in the afternoon and evening due to localized thunderstorms.