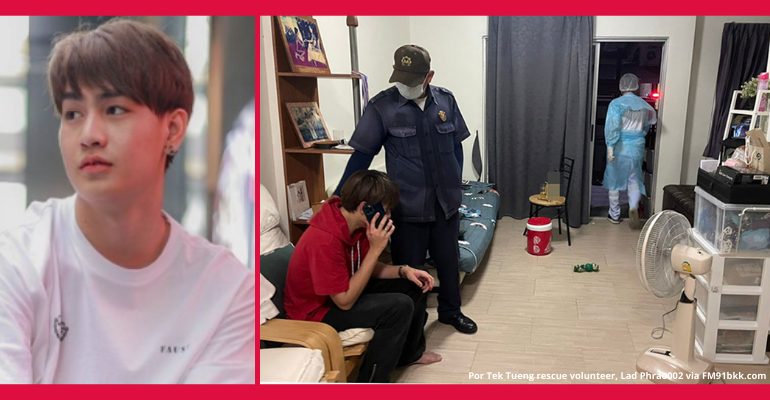 21-year-old Thai actor Thanapat Chanakulpisan, better known as Toy Toy, was denied bail on Aug 8th “due to the severity of the crime” — the alleged stabbing of his 25-year-old girlfriend.

The dismissal of the bail request came soon after the stabbing last Friday, August 6th.

Toy Thanaphat’s lawyer filed for the actor’s release on bail, though the police were against it. However, the Min Buri Criminal Court rejected the lawyer’s request.

The Bangkok Post reports: “The court denied the bail request on the grounds that the crime carries severe penalties and the suspect could take flight if released.” The bail request was then taken to the Appeal Court and denied as well, as: “the lower court’s decision was correct.”

Toy Thanaphat — famous for his work on the soap opera Why R U? — had lived together with his girlfriend Chatsaran Suwannakit in a two-storey townhouse in the Khlong Sam Wa district of Bangkok.

His girlfriend was found in the bedroom, having suffered 20 stab wounds on her body, particularly her chest.

Though the actor had been in a panicked state after the incident occurred, he was escorted away from the crime scene at 1 AM on Aug 6th without incident.

Thanaphat initially claimed that they had been quarrelling, that he and Suwannakit were arguing over his career. This resulted in the latter screaming at him to pack his bags and leave their residence. Then, Suwannakit took a knife from the kitchen. He feared she would stab herself. However, even though he tried to wrestle it from her, she still managed to stab herself multiple times.

However, according to Astro Gempak, Thanaphat confessed that he stabbed his girlfriend in a jealous rage after further investigation.

It was later revealed that Suwannakit was said to have bipolar disorder.

Thanaphat Chanakulpisan is currently at the Min Buri Remand Prison and will undergo a 12-day detention period from August 7th until the 18th.