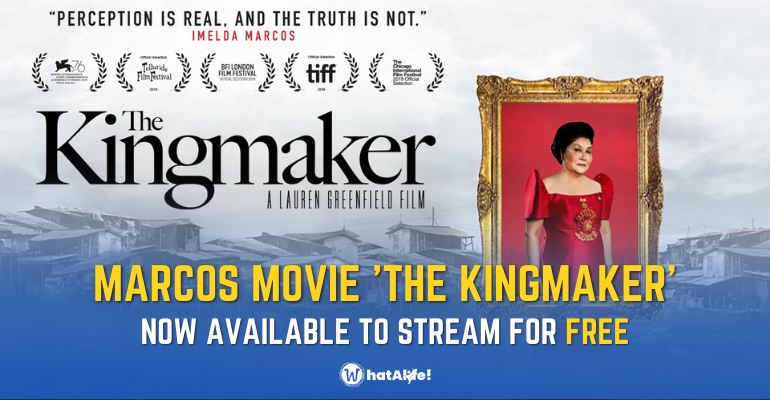 MANILA, PHILIPPINES — The Marcos 2019 documentary  ‘The Kingmaker’ by Lauren Greenfield is now available for everyone to stream for free.

‘The Kingmaker’ is a story that shows the dictatorship of the former president of the Philippines, Ferdinand Marcos, based on the point of view of his wife, Imelda Marcos.

Free streaming of the documentation now allows the interested viewers to watch an almost two-hour documentary of Greenfield through Vimeo even without a Vimeo account. See tweet below:

“Finally! We have worked out an arrangement with our partners @ABSCBN and @iwanttfc, and are now able to share THE KINGMAKER with *all* of our friends in the Philippines – http://vimeo.com/358556466“

The documentary narrates the starting point of the relationship of Imelda and Ferdinand Marcos, Imelda’s influence on Ferdinand Marcos during his regime, the EDSA revolution, Martial Law, the exile of the Marcoses, and their return to the country, where they aim for a political comeback.

According to Rappler’s exclusive interview with Lauren Greenfield, Greenfield said that people should remember the happenings in history. People should be aware and informed about the past to prevent it from happening again in the future.

During the exclusive interview, Lauren Greenfield reminds the Filipino citizens to be cautious as manipulation of information is rampant.

The dissemination of false information could impact the elections.

“I would like people to take also the manipulation of information and the way it can impact elections. I hope it has resonance in the Philippines, but also, outside the Philippines,” said the filmmaker. – WhatALife!

Also Read: Marcos will not participate in the Comelec debate