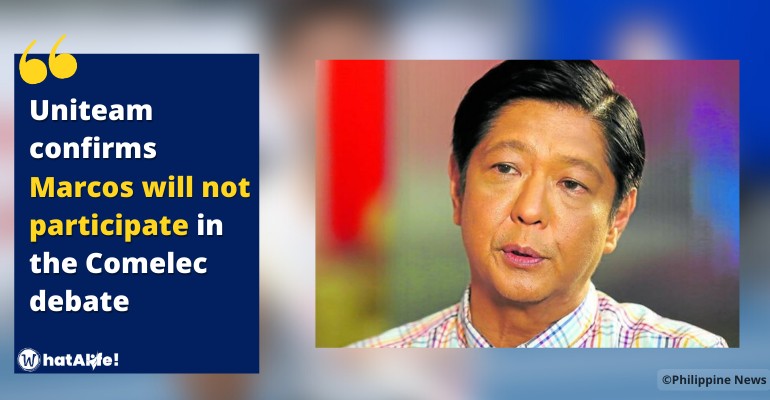 Ferdinand “Bongbong” Marcos Jr., a.k.a BBM, a Presidential candidate, will not participate in the Commission on Elections presidential debate (Comelec).

“I confirm our non-participation in the Comelec-sanctioned debate this coming Saturday, March 19, 2022,” Rodriguez stated, Marcos’ spokesperson.

“We shall continue with our preferred mode of direct communication with the people and engage them in a more personal face to face interaction that discusses real issues that affect them today, tomorrow and in the days to come as this election is all about our collective future,” he added.

Marcos’ camp stated previous month that he would prefer not to participate in discussions in which the contestants would be forced to argue against one another.

Marcos, who served as a senator from 2010 to 2016, is extremely selective in terms of giving invitations to debates and interviews in the run-up to the May 9, 2022 elections.

Senator Imee Marcos recommended her brother to attend in the televised debate to respond to “all” of the accusations, according to a radio show with DWIZ on Saturday.

The so-called UniTeam duo consists of Marcos and Duterte.

Six of the ten presidential candidates have guaranteed to attend the Commission on Elections (Comelec) PiliPinas Debates in writing, while three others have pledged orally. Read more here.

Also Read: When is Elections 2022 in the Philippines?