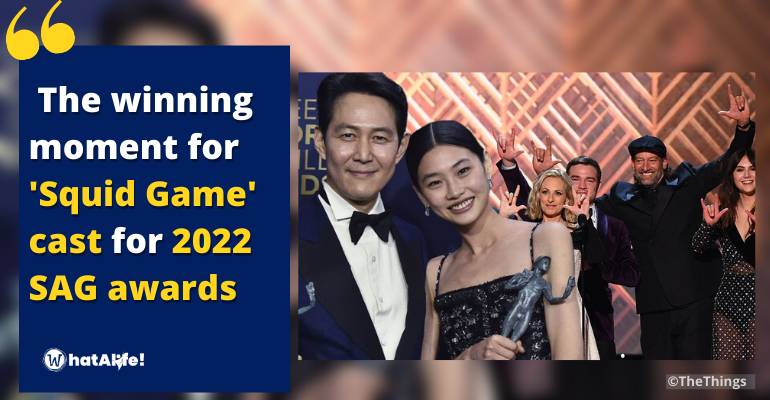 CALIFORNIA, USA — It was a winning moment for the cast of Ted Lasso, the leads of Squid Game, and Troy Kotsur in the Screen Actors Guild Awards. The Screen Actors Guild Awards is the main event that gives recognition to actors and actresses in the film industry. The SAG ceremony was held at Barker Hangar in Santa Monica, California, and was aired and broadcasted on both TNT and TBS channels.

Troy Kotsur, a veteran supporting actor in the film CODA, is the first deaf actor to receive an individual Screen Actors Guild award for best-supporting actor.

Other actors from non-English language series – the Korean phenomenon “Squid Game” also received an award for the first time in the industry.

Lee Jung-jae, a 49-year-old South Korean actor and one of the leads in Squid Game, won the best male actor award. Lee Jung Jae won the prize for outstanding performance by a male actor in a drama series at the 28th ‘Screen Actors Guild Awards’ on February 27th for his part in Squid Game.

This is Lee Jung Jae’s first SAG nomination and win, and he is also the first Asian male actor to do it.

“Oh my god, thank you so much! This is truly huge that’s happened to me. Well, I did write a lot but I don’t think I can read it all,” Lee Jung-jae said while accepting his award on stage.

“Say no words, thank you so much SAG-AFTRA awards, and thank you to the global audience for all of your love for Squid Game. And thank you Squid Game team.” he added.

“First and foremost, thank you so much. I have sat many times watching you on the big screen dreaming of one day becoming an actress. I just want to say thank you so much,” Jung Ho-yeon said in Korean which was translated to English by an interpreter.

“Thank you [for making my] dream and opening the door for me,” the actress said in English after pausing to cry a few tears. “I love my Squid Game teammates!” She gave her acceptance speech in Louis Vuitton style.

This is Jung Ho-yeon’s first SAG Award, which is understandable given that Kang Sae-byeok was her first acting role. Regardless, millions of Netflix subscribers fell in love with the North Korean defector who takes part in a series of hazardous games in the hopes of earning enough money to reunite with her family.

It was a memorable experience for the three of them as the Screen Actors Guild Awards was a huge event that gathers the actors and actresses in the film industry.