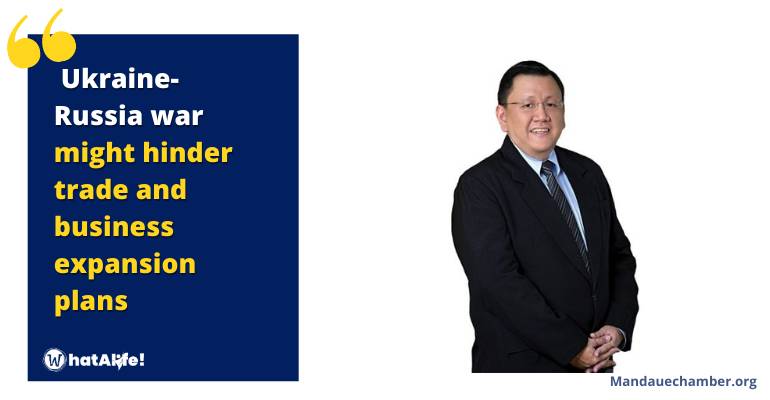 The conflict between Russia and Ukraine, according to Steven Yu, president of the Mandaue Chamber of Commerce and Industry, could impede the country’s economic recovery.

The invasion of Ukraine by Russia has sent shockwaves around the world, including the Philippines, as it threatens to destabilize oil and commodity pricing and supply chains. The battle may potentially frighten investors.

“The Russia-Ukraine tension will lead to inflationary pressures and possible interest rate hikes. But it depends on how it accelerates further and if any sanctions are thrown in by the North Atlantic Treaty Organization to Russia. The severity of the impact like an increase in crude and commodity prices like wheat, among others and rate hikes will determine the setback to our recovery efforts. We hope that it will not escalate further and will be settled soon,” Yu said.

Ukraine, called “Europe’s breadbasket,” exports more than 40% of its corn and wheat to the Middle East and Africa.

Commerce Secretary Ramon Lopez believes the Russia-Ukraine situation will have a minor impact on Philippine trade. Wheat, oil, iron and steel, electronics, and agricultural items are among the major merchandise traded with Ukraine and Russia, according to Lopez.

“But its disruption in the prices and supply chain of oil and key commodities like wheat, iron ore, and the high degree of uncertainties if such (a) crisis worsens are the factors that can impact global recovery efforts,” Lopez said.

The crisis between Ukraine and Russia, according to Jason King, president of King Properties, would have a domino effect on global trade, and corporations may postpone planned expansions because to the uncertainty.

“It is really a wait-and-see scenario. Given the situation, companies and multinational firms will probably prolong and hold off future expansions with other countries, uncertain of what is going to happen. It is not a direct impact on us, but definitely, it is something that will in a way affect us,” King said.

The Philippine government, according to Yu, must deal with high oil prices and other inflationary measures while maintaining to pump-prime the economy.

“It has to maintain an accommodative monetary policy as we hope that the Federal Reserve will temper the hikes due to geopolitical risks,” Yu said. – WhatALife!