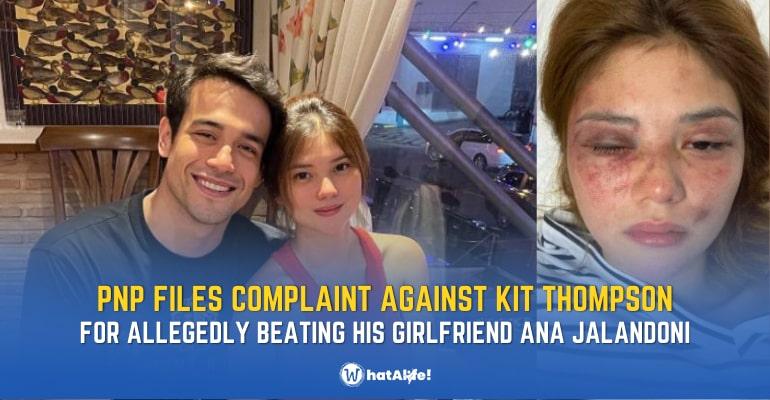 In a statement issued on Saturday, March 19, the PNP cited the complaint as a violation of Section 5 (a) of Republic Act 9262, also known as the Anti-Violence Against Women and Children Act.

“We will wait for the decision of the prosecutor based on his appreciation and evaluation of evidence presented. The PNP has gathered the necessary evidence and witness accounts in the course of its investigation,” PNP Chief General Dionardo Carlos said.

Thompson was arrested on Friday, March 18, after authorities received reports of an altercation between the couple inside a Tagaytay City hotel room. In addition, the actor was subjected to inquest proceedings at the Tagaytay City Prosecutor’s Office.

On the other hand, Jalandoni has spoken out about the incident, showing her bruised face to her social media followers. She stated that one does not harm someone they love.

“When you love someone, you will never ever harm them. Minahal mo ba talaga (Did you really love them)? This is me saying, you all should be careful out there,” she said.

Jalandoni then expressed gratitude to those who checked up on her, saying she would release a statement soon.

Thompson’s management Cornerstone Entertainment said in a statement that they are unable to comment on the matter because they “have yet to receive a formal report regarding the alleged incident.”

They said in a statement that they do not condone any act of violence and profoundly value the dignity of women.

“However we request the public to be mindful of casting judgment based on unfounded reports being circulated online,” they said.

Thompson and Jalandoni publicly made their relationship last December 2021. – WhatALife!