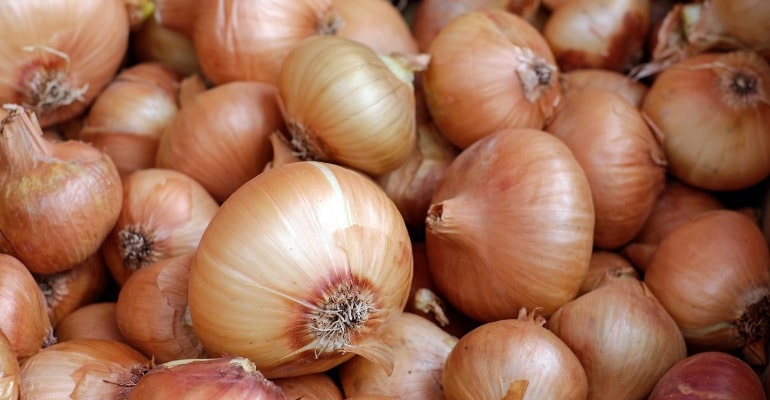 MANILA, PHILIPPINES — On Thursday, September 8, 2022, an official of the BPI-13 (Bureau of Plant Industry in the Caraga Region) said the bureau has started the destruction of some 12,000 kilos of smuggled white onions seized at the port of Surigao City.

BPI-13 plant quarantine officer Rayme Ladao said in an interview that on Monday, September 5, they seized the contraband at the Surigao port. The onions were placed in 1,498 net bags and loaded in a 10-wheeler truck from Cagayan de Oro City bound for Tacloban City.

“The transportation of the white onions has no authority. There is no sanitary and phytosanitary import clearance or SPSIC being issued by the agriculture department to authorize such importation,” he said.

The BPI-13 officer said it has an estimated market value of PHP 6 million.

Usually, imported goods are delivered to major ports in Mindanao, such as the cities of Cagayan de Oro and Davao, but “they tried to domestically transport the smuggled white onions from Cagayan de Oro via the Caraga Region, to Tacloban,” he remarked.

“Since these white onions are not documented, we cannot assure if these are fit for consumption or have passed the necessary processes required by law. Therefore, there is a need to destroy these smuggled products,” he stated.

Protecting the people’s health in the region is necessary, Ladao said. Meanwhile, they destroyed the intercepted contraband in Surigao City’s landfill area.

On August 11, 2022, the BOC-CDO (Bureau of Customs-Port of Cagayan de Oro) seized 12 containers of smuggled agricultural products from the Mindanao International Container Terminal Port, Tagoloan in Misamis Oriental; the products were worth Php 36 million.

They were consigned to Primex Export and Import Producer and Frankie Trading Enterprises, and the shipments from China were declared as “Spring Roll Patti” and “Plain Churros” but were instead red and white onions.

Cruz said the Port of Cagayan de Oro was relentless in curbing the smuggling of agricultural products in the country and Northern Mindanao primarily, as it dramatically affects the local farming industry.

Due to violating Section 1400 (Misdeclaration of Goods) and Section 117 (Regulated Importation) of RA (Republic Act) 10863, a.k.a. the Customs Modernization and Tariff Act, and the RA 10845, the Anti-Agricultural Smuggling Act, warrants of Seizure and Detention has been issued against the shipments. –WhatALife!/Zed