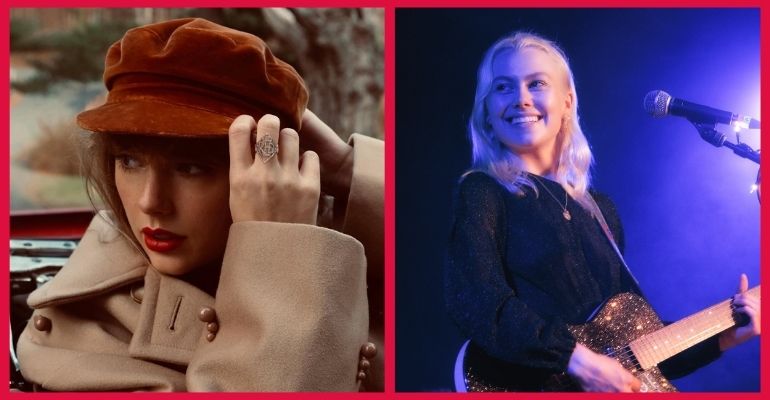 Phoebe Bridgers is going to be on Taylor Swift’s Red (Taylor’s Version) album!

The announcement came on August 5th in the form of a Twitter video — in dark red, one could say maroon, but that’s not important. What is important was that sets of jumbled letters appeared one after the other in the video.

According to Twitter user @jelleverbeek, when unscrambled, the answers came out to be the names of the people joining Swift in the album. One of the answers was, you guessed it: feat. Phoebe Bridgers.

Originally the only information about the new album Bridgers will feature in was its release on November 19th and that it would contain a whopping 30 songs. In addition to that, with the release of this video, Swift has revealed a part of the tracklist of Red (Taylor’s Version). So, to save time, here they are:

Bridgers is going to join Swift’s song, “Nothing New.” Also, in its About section on the music site Genius, it states:

Swift mentions “Nothin’ New” in the journals she released alongside her 2019 record Lover. In the journal, she reveals she wrote it for her 2012 record Red — she later included it on 2021’s Red (Taylor’s Version) as a “From the Vault” track.

The track was inspired by Joni Mitchell’s “A Case Of You.”

Phoebe Lucille Bridgers was born and raised in California. She used to busk around the Pasadena Farmers Market when she was young. In later years, she got into the music scene by playing bass and singing with other artists at local performances.

After signing onto the music label Dead Oceans, Bridgers released her first album, Stranger in the Alps, in 2017. Also, its most famous track is “Motion Sickness,”