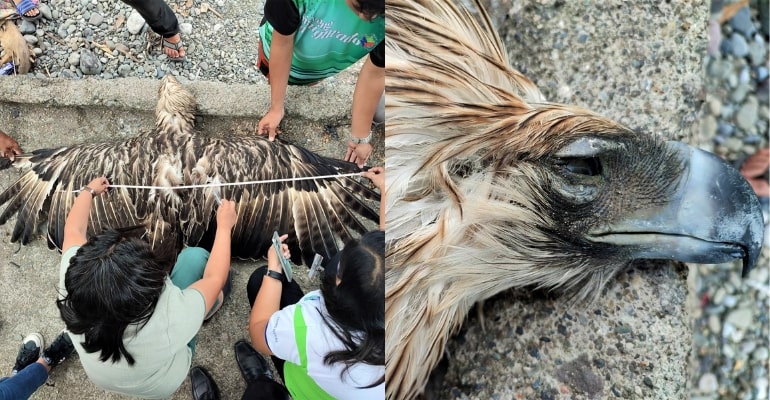 SARANGANI PROVINCE, PHILIPPINES — On September 19, 2022, the Department of Environment and Natural Resources – Soccsksargen posted on its official Facebook page images of a critically-endangered Philippine eagle found dead in Sarangani Province.

The dead eagle was found by government employee Habib Maguid at around 9:30 in the morning along the shoreline of Purok Maguid, Barangay Daliao in Maasim Town.

The eagle was reported to be 4-5 hours dead when it was found; its cause of death is yet to be determined. However, the carcass has been sent to the Philippine Eagle Center in Davao City for necropsy.

How many Philippine Eagles are left?

The devastating news of a Philippine eagle found dead shocked the country. This left netizens to wonder how many are left of this critically-endangered species.

It is estimated that there are only 400 pairs of Philippine eagles left in the wild (and may even be fewer than 400).

According to philippineeaglefoundation.org, each pair needs about 4000 to 11000 hectares of forest land in order to thrive. However, while they can live up to 40+ years in captivity, they may have fewer years in the wild.

Moreover, a Philippine eagle only lays a single egg every two years since they usually wait for their offspring to survive on their own before producing another egg.

Their egg is incubated alternately by both parents for about 58 to 60 days. Then, for the first 40 days of the eaglet’s life, the male is tasked with hunting while the female stays with her young. – WhatALife!