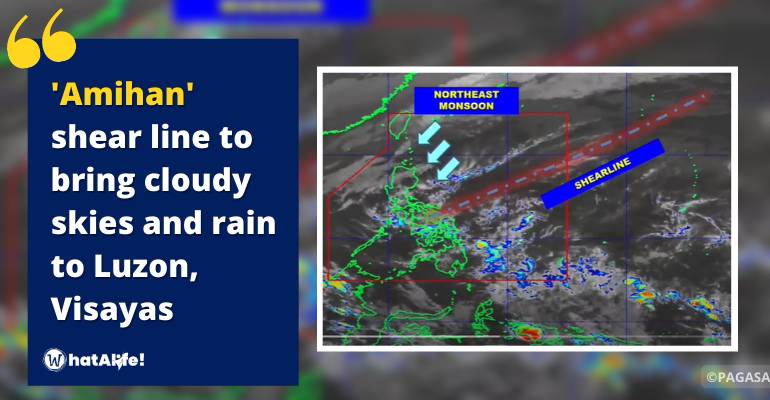 On Thursday, PAGASA Weather update reports the northeast monsoon, locally known as “Amihan”, and the shear line or tail-end of a cold front, may bring cloudy skies and rain to Luzon and Visayas.

According to The Philippine Atmospheric, Geophysical, and Astronomical Services Administration (Pagasa), they predicted that the northeast monsoon will affect Northern and Central Luzon, while the shear line would hit the eastern half of Southern Luzon and the Visayas.

Due to the northeast monsoon, overcast skies with light rains are predicted over Cagayan Valley, Apayao, and Aurora, as well as cloudy weather with isolated precipitation over Ilocos Region, the rest of Cordillera Administrative Region, and the rest of Central Luzon.

The shear line will bring cloudy skies, scattered rains, and thunderstorms to Bicol, Eastern Visayas, and Davao regions, Pagasa said, adding that moderate to heavy rainfall could cause flash floods or landslides in these areas.

Partly cloudy skies with isolated rainfall due to localized thunderstorms are expected in Metro Manila and the rest of the country, according to the weather forecast, which could result in flash floods or landslides.

The rest of the country will see light to moderate northeast winds and mild to moderate sea conditions, according to the forecast.

Watch the 4 AM weather report below:

Also Read: 8 regions in Eastern Visayas get cloudy skies due to trough of LPA