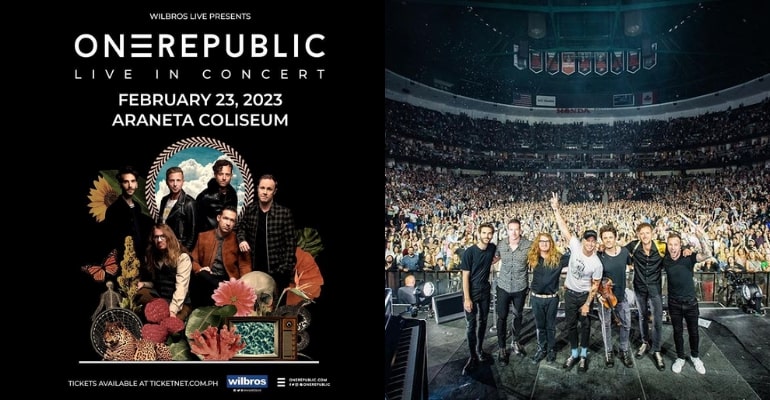 HOLYWOOD, USA — In a recent post by concert promoter Wilbros Live on Instagram, the American pop rock band OneRepublic will kickoff its Asia’ Live In Concert’ Tour through a one-night concert at the Araneta Coliseum on February 23, 2023. Ticket sales will open on September 30, 2022, at 10 am via TicketNet; no ticket prices have been announced.

Years after their last performance in Manila as the headline for the MTV Music Evolution in the capital in 2016, OneRepublic is back for a one-night concert in the country!

The ongoing ‘Live In Concert’ of the band started with a 40-city US run on July 8 and is set to resume in October for Europe stops, including Italy, Germany and Switzerland. After touring Europe, OneRepublic will then make its way to Asia before heading to Australia and New Zealand in March.

Check out the concert dates for Asia below:

Known for their hits “Counting Stars,” “Secrets,” “Feel Again,” and “Love Runs Out,” OneRepublic has been a favorite of fans around the world.

In the recent Top Gun: Maverick movie, the band released their most recent single, ‘I Ain’t Worried,’ as part of the soundtrack in May. The song is their second original single after ‘West Coast’ released back in February. – WhatALife!