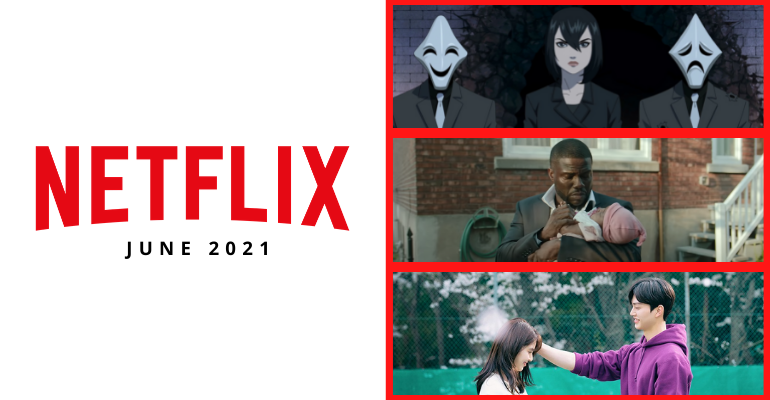 With the new month coming, Netflix is once again set to release new titles from the highly anticipated Netflix Original Filipino series Trese to the heartwarming story of Fatherhood. Check out below the titles coming on Netflix this June!

What’s coming to Netflix this June 2021?

June 3: Maledicto – Baffled by the case of a possessed teenager, the psychologist-turned-priest has teamed up with a clairvoyant nun. Released in 2019, the film was the first FOX Philippines produced directed by Mark Meily.

June 3: Pretty Guardian Sailor Moon Eternal The Movie: Part 1 & 2 – The 2021 Japanese two-part anime film is based on the Dream arc of the Sailor Moon manga by Naoko Takeuchi. Scattered Sailor Guardians reunite to restore light back after a dark power has taken over the Earth.

June 3: Babae at Baril (The Girl and the Gun) – Directed by Rae Red, one of the promising independent directors in the Philippines, Babae at Baril depicts the world of violent, creepy men through the lens of a girl who has to deal with the terrifying, never-ending cycle of sexual harassment and physical threat in and out of her work.

June 3: Cara x Jagger – The film follows the love story of a couple in an extraordinary circumstance. Directed by Ice Idanan.

June 4: Sweet Tooth is an upcoming American fantasy series based on the comic book of the same name by Jeff Lemire.

June 4: Sweet & Sour – An upcoming South Korean film that follows the love story of a couple who fell in love at first sight, however, drifted due to stress at work.

June 4: Feel Good: Season 2 is back for its second installment of laughter and drama, created by Mae Martin and Joe Hampson, set in contemporary London. The show follows the development of a couple where one struggles to recover from drug addiction and the other struggles to tell friends and family about her same-sex relationship.

June 11: Trese Season 1 is an upcoming Netflix Original Filipino anime series based on the popular Filipino komik of the same name by Budjette Tan and Kajo Baldisimo.

June 11: Lupin: Part 2 – The second half of the highly-anticipated five-episode hit French series which picks up after Part 1’s cliffhanger finale.

June 17: Hospital Playlist Season 2 follows the life of doctors and nurses, as well as patients, at the Yulje Medical Center.

June 18: Fatherhood follows a heartwarming journey of a widowed man into fatherhood and raise his daughter on his own, based on a true story.

June 18: Elite: Season 4 – The fourth season of the franchise, opening a new year at Las Encinas.

June 18: Rurouni Kenshin: The Final is a 2021 Japanese live-action film based on the final arc of the manga series with the same name, but with a little twist from its original narrative.

June 18: So Not Worth It is an upcoming K-drama series that follows the life of students who reside at an international university dormitory.

June 20: Nevertheless is based on a popular South Korean webtoon of the same name. The series follows a hyper-realistic romance between a man who dislikes relationships but likes to flirt and a woman who wants a date but doesn’t believe in love.

June 30: America: The Motion Picture – A chain-weilding George Washington teams with beer-loving bro Sam Adams to take down the Brits in a tongue-in-cheek riff on the American Revolution.

Channing Tatum is George Washington!
Olivia Munn is Thomas Edison!
Other actors are other characters!

Time to officially reveal the cast of AMERICA: THE MOTION PICTURE, crossing rivers to deliver you to a prosperous new horizon on June 30. pic.twitter.com/PWy1Yo62ms

Note: Dates and title are subject to change.