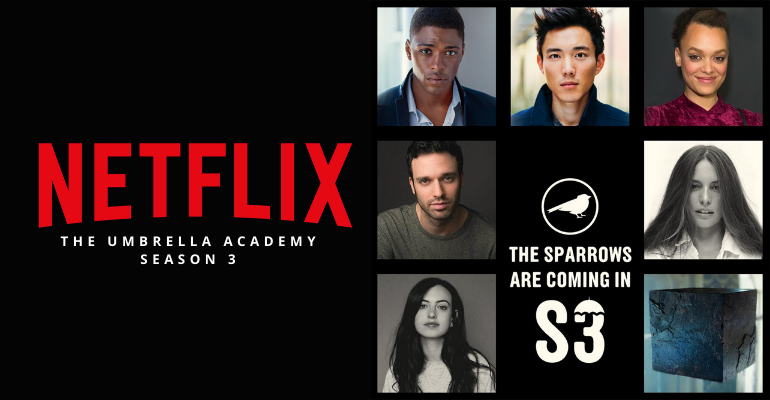 We heard a rumor that the Sparrow Academy crew has been revealed!

The Umbrella Academy Season 3 has unveiled the cast line-up for The Sparrow Academy on Monday, January 11.

Netflix announced via Twitter that Justin Cornwell, Britne Oldford, Jake Epstein, Genesis Rodriguez, and Cazzie David will be appearing as the alternate crew in the next season of The Umbrella Academy, together with Justin H. Min, who is set to return as Ben but not the one that we know. They will star alongside Christopher, a mysterious cube that serves as a loyal oracle of the Sparrows.

a little birdie told us about the new crew ?

Meet the cast of The Sparrow Academy below.

JUSTIN CORNWELL will play MARCUS — a natural born leader that oozes confidence and keeps the family together who is equally as charming as he is chiseled and colossus. pic.twitter.com/bJIoKBAJ5G

JUSTIN H. MIN will play BEN … but not the one we know. This Ben is scheming, tactical and vicious, determined to gain his status as leader. pic.twitter.com/AJnYCRgEJ0

BRITNE OLDFORD will play FEI, who sees the world in a special way. She’s typically the smartest person in the room and willing to negotiate – yet, once you cross her, there’s no turning back. pic.twitter.com/0o2V2aPa6I

JAKE EPSTEIN will play ALPHONSO — a scarred crime-fighter with a caustic and biting sense of humor who enjoys verbally berating his enemies, almost as much as he enjoys a good pizza and a six-pack of beer. pic.twitter.com/aqxUU9PMp0

GENESIS RODRIGUEZ will play SLOANE, a romantic dreamer eager to see the world beyond the academy. Even though she feels tied down to her family, Sloane has plans of her own…and she may just act on them. pic.twitter.com/TnP1JNTA2M

CAZZIE DAVID will play JAYME, a loner with a fear-inducing snarl you’d be wise to avoid at all costs. She doesn’t say much because she doesn’t have to. pic.twitter.com/l17wZ50ar8

EXISTENTIAL DREAD INDUCING PSYKRONIUM CUBE (Newcomer) will play CHRISTOPHER, a telekinetic cube that can turn the room freezing cold and induce paralyzing fear without so much of a warning. The trustworthy, loyal oracle of the Sparrows is treated as just another sibling. pic.twitter.com/EGXjmRxvkS

The production on The Umbrella Academy Season 3 is set to kick off in Toronto next month. So stay tuned for more updates!