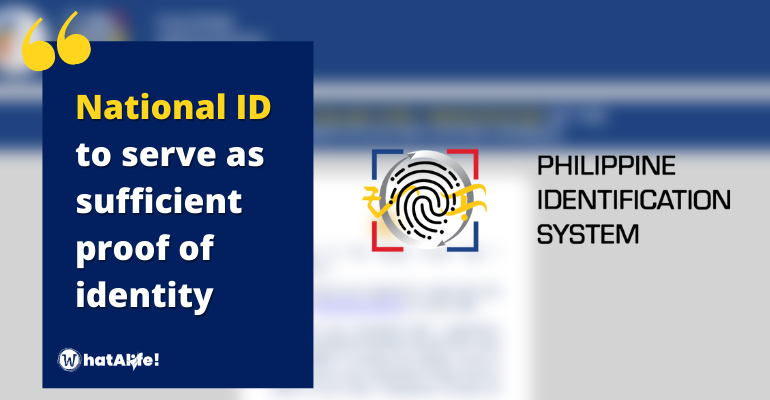 MANILA, PHILIPPINES – President Rodrigo Duterte has mandated that the National ID or the Philippine Identification System (PhilSys) be considered and accepted as acceptable proof of identity and age in all government and private transactions through Executive Order 162.

“An urgent need to institutionalize the acceptance of the PhilID and PSN, as authenticated, as sufficient proof of identity and age in all government and private transactions, to improve efficiency in the delivery of social services, strengthen financial inclusion, and promote ease of doing business.” President Rodrigo Duterte states in Executive Order 162.

PhilSys will serve as the government’s central identification platform for all citizens and residents in the country, according to the EO.

The national ID will be the official government-issued identification card and proof of identity for cardholders. Meanwhile, for both government and private transactions, the PhilSys number will also be recognized and accepted. This makes school enrollment, bank account opening, and other transactions easier.

He emphasized the importance of national ID in terms of speeding up government delivery of social and other public services, as well as public access to private-sector services — all without the burden of bringing several ID cards issued by various agencies.

However, the senator repeated his request for the Philippine Statistics Authority (PSA) to address the issue of national ID card delivery delays and ramp up its communication campaign about how to apply for PhilSys cards.

“It bears repeating that the PSA should expedite the printing and delivery of the national ID cards – as well as renew and intensify its information drive on how Filipinos can apply for them,” Lacson said.

The Philippine Statistics Authority is in charge of the PhilSys, with help from the National Economic and Development Authority and other government departments on policy and coordination. – WhatALife!

Have you registered for the National ID yet? Find out how here: How to Register for Philippine National (PhilSys) ID Online