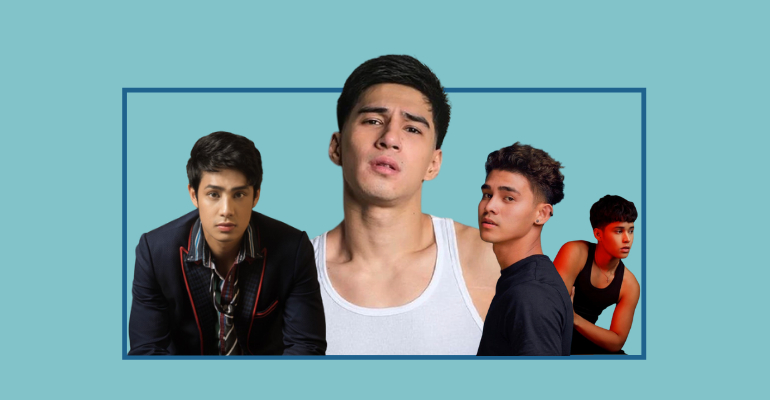 While actors Daniel Padilla, James Reid, Alden Richards, and Enrique Gil remain at the top-tier, these rising stars are capturing the hearts of the growing-up Gen Z.

According to the Pew Research Center, anyone born from 1997 onward is part of a new generation known as Generation Z (Gen Z). But of course, we will make an exemption on this list—including 20-ish actors and internet personalities that rose to fame between the 2010s and the 2020s.

The dreamboat. The matinee idol. The screen lover. The heartthrob. Check out these 13 Gen Z adorned celebrities.

He’s Into Her male lead Donny Pangilinan established a name for himself as an actor and performer despite coming from a well-known family in the country. He captured the hearts of Filipino fans with his bad-boy yet charming aura. Donny made his big-screen debut in the 2018 film Walwal (Wasted) and rose to prominence in the movies James, Pat, & Dave (2020) and He’s Into Her (2021) paired with Belle Mariano.

Fil-Am matinee idol Jameson Blake started appearing in TV commercials before auditioning as a teen housemate in Pinoy Big Brother: 737 in 2015. Despite not making it to the final night, Jameson still established a following when he joined the all-male dance group Hashtags and for his acting performance in the movies 2 Cool 2 Be 4gotten (2016), Haunted Forest (2017), Mama’s Girl (2018), and So Connected (2018).

Good looks definitely run in their genes, as Iñigo Pascual flaunts his gorgeousness to the world. But, Iñigo isn’t only a pretty boy. He is a multi-talented performer that follows his dad, Piolo Pascual’s footsteps that maybe one day surpass him. His 2016 hit-single Dahil Sa’yo was top-ranked on Billboard Philippines and won Song of the Year at the 30th Awit Awards (the Grammy version of the Philippines).

Kokoy de Santos is a heartthrob beyond the heterosexual norm. He swooped the hearts of not just girls but also those who loved the Boys’ Love (BL) subgenre. Kokoy rose to fame following his successful role in Fuccbois (2019), an official entry to the 15th Cinemalaya Philippine Independent Film Festival. This led him to his breakthrough role in Netflix’s Gameboys, where he paired up with actor Elijah Canlas for the BL series.

The son of veteran actors Carmina Villarroel and Zoren Legaspi, Mavy is growing and glowing up. And like his father once was, Mavy now transitions into being that cute little boy from Selecta commercials to his generation’s matinee idol. He is currently starring in GMA Network’s romantic series I Left My Heart in Sorsogon as a loveteam of actress Kyline Alcantara.

The oldest on this list, Albie Casiño recently made headlines following his eviction in Pinoy Big Brother: Kumunity Season 10 (2021) as a celebrity housemate. He rose to prominence after appearing in Your Song Presents: Gimik 2010 and starring in hit teleserye Maria Clara (2010-2011) as Kathryn Bernardo’s leading man. Back then, he captured many young teens’ hearts for his cute face and heartthrob appeal.

Upon his comeback, Albie has long left his soft, innocent looks for his toned, macho physique—swirling the soft fantasy of the current adolescent generation.

Like Jameson, Ronnie Alonte also debuted in the showbiz industry as part of the all-male dance group, Hashtags. He established his status as his generation’s matinee idol as he pursued an acting career, appearing in several Maalaala Mo Kaya episodes—including enacting his own story in 2016. Ronnie starred in Vince and Kath and James (2016), alongside stars Julia Barretto and Joshua Garcia.

Award-winning actor Elijah Canlas built a following after his successful role in the Netflix series Gameboy (2020). Like his counterpart in the BL series, Elijah stole hearts who had the liking of the subgenre.

Kit Thompson first gained traction when he became a housemate in Pinoy Big Brother: Teen Edition 4 (2012)—where his iconic line “gusto kong sumabog, at sabihin ang masasamang… mga words” was born. But it wasn’t the only thing that made him stand out, as his blunt personality gives off gruff, bad-boy vibes, which his fans adored.

Some say Joshua Garcia is the John Lloyd Cruz of his generation. But while nothing beats the JLC, Joshua emits his own unique charm that captivates the attention of fans. His acting performance is also remarkable, having to earn several accolades, including Best Actor and Best Male TV Personality, to mention a few. No wonder he is considered one of the best young actors in his generation and one of the sought-after heartthrobs.

Playing the silent yet rebellious eldest son of “Sir Chief” in the hit-teleserye Please Be Careful with My Heart (2012-2014), pogi actor Jerome Ponce is an ultimate boy-next-door in his generation. He debuted in the showbiz industry as part of the 12 “discoveries” of Star Magic Circle in 2013. He moved on from his “good boy” persona to the anti-hero in the primetime show The Good Son (2017).

Former child star Paul Salas is all grown up now and is an ultimate hottie. He transitioned from an innocent-looking, naive boy to a brawny, “you don’t wanna mess with me” man, flaunting his well-built physique, cutting-edge jawlines, and alluring eyes. He recently starred in the television series Lolong, The Lost Recipe, and Dear Uge Presents: Jing, ang Bato in GMA Network.

Did we miss your hottie crush? Let us know in the comments below!

Also Read: These are the 15 biggest Filipino YouTubers in terms of subscriber count, from Ranz Kyle to Cong TV