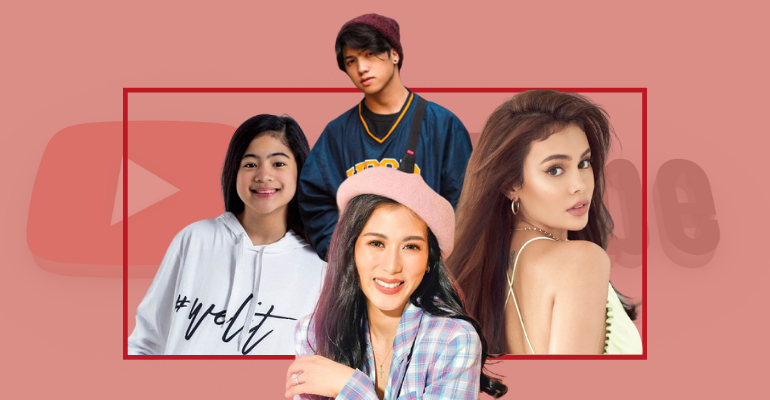 Since its emergence in the mid-late 2010s, YouTube has become one of the sources of entertainment for us, especially during the pandemic lockdown. And while the world celebrates big-time international YouTubers such as PewDiepie, MrBeast, and Dude Perfect, the Philippines also boasts Filipino YouTubers with over a million following.

The platform has also produced a new generation of celebrities and influencers. For some traditional media talents, YouTube has become a platform to express creative freedom and eventually into a lucrative full-time career.

Excluding company-run channels, these are the top 15 Filipino YouTubers with the most subscribers, according to Social Blade in 2021.

Placing number 15, Kaycee & Rachel in Wonderland Family is a family vlogging channel targeting most of its content to the young generation. It has accumulated over 2 billion views since the channel started in September 2018.

Check out their recent Squid Games in Real Life video below.

Viy Cortez is a businesswoman-turned-vlogger who still manages her businesses amid being a YouTuber. She started making YouTube videos in 2016 and has accumulated nearly 620 million views. She is also known as the partner of fellow Filipino YouTuber Cong TV.

Watch Cortez’s recent vlog below, where she announces that she and Cong TV expect another baby a year after suffering a miscarriage.

Lloyd Cafe Cadena climbed up the ranks as one of the most subscribed Filipino YouTubers because of his witty skits and parodies. He began uploading videos for his iconic “LC Learns” series in 2011. Cadena rose to prominence after documenting his travel adventures and “all other crazy random things he’ll get into as he curiously explores the world,” according to his YouTube bio. His content varied from cooking to challenge videos, among many others. Moreover, Cadena also used his platform for charitable aid.

Sadly, Cadena suddenly passed away in September 2020 after suffering cardiac arrest. He later tested positive for COVID-19. Over a year following his death, his main channel continues to thrive with 5.86 million subscribers and his videos accumulating over 500 million views.

Watch Cadena’s last vlog prior to his sudden passing.

TV personality and comedian Vice Ganda is among the traditional media stars who joined YouTube, posting comedy skits and travel vlogs to directly reach his fans. He joined the platform in March 2014 and has garnered more than 350 million views since. Watch his recent upload ‘English Only Please Challange’ video below.

ChoOxTV (real name is Edgar Dumali) rose to prominence in the YouTube scene as a streamer/gamer featuring mainly the mobile multiplayer online battle arena (MOBA) game Mobile Legends. He is also famous for using voice filters during his streams. He joined YouTube in August 2017, and as of writing, has a cumulative of over 900 million views. Watch his recent game upload below.

Despite joining YouTube in 2005, AKOSI DOGIE (real name Setsuna Ignacio) began uploading on the platform four years ago behind the VR character Doge featuring character builds for MOBA Mobile Legends. He exploded in the streaming community following his success in the Mobile Legends community. Since then, he revealed his face, did multiple collabs with other gamers on the platform, and other vlogging content. As of writing, Dogie has amassed over a billion views. Watch his recent upload below.

Doc Willie Ong joined YouTube in 2007 and has used the platform to give medical advice and healthy tips along with his wife, Doc Liza. The channel has produced over 1,300 videos on all health concerns, from women’s health to mental health, garnering nearly 860 million views. Ong’s following does not stop at YouTube, however, as his content is also available across the social media platform there is. Check out his channel to know more about him.

Jelai Andres is a vlogger-turned-actress who produces content featuring beauty tips, travel, and vlogging content, to name a few. Watch the video below to get a sneak peek of her type of content.

Multi-talented internet star Donnalyn Jereos Bartolome, mononym Donnalyn, started uploading YouTube videos when she was just 14. She posted various types of content, from makeup tutorials to dance and song covers, which gradually earned her a following on YouTube and other social media platforms. Donnalyn signed up with Viva Records and Flipmusic at age 16 and started releasing self-written songs. She has also starred in a couple of films.

Watch below her recent upload where she revealed the cost for her recent music video for her song O.M.O. and some of its hidden messages.

One of the OG Filipino YouTuber, Cong TV (real name Lincoln Cortez Velasquez) started his channel in 2008 and rose to fame for his comedic stints and parodies. Aside from his skits, he is also known for his various content ranging from music to vlogging to online streaming—where his signature catchphrases “Kumusta mga paa?” and “payaman” were born. Considered one of the top YouTube personalities in the Philippines, Cong TV has amassed over a billion views. Check out his latest upload below.

Zeinab Harake’s YouTube channel went from zero to a million subscribers in just two years. She launched her channel in October 2017, and by September 2019, she celebrated her 1-million subscriber milestone. Known today as one of the most well-known vloggers in the country, Harake has amassed over 11.4 million subscribers with nearly 780 million cumulative views.

Harake is also the partner of Ex-Battalion rapper Skusta Clee. They made showbiz headlines in the past due to online mudslinging between them, but have since repaired their relationship, and now have a child.

Watch Harake’s recent upload where she dresses up her baby girl to commemorate her seventh month.

Multi-talented Alex also releases self-written tracks and some parodies on her platform, garnering over 1.1 billion views. Watch her latest skit below featuring her Daddy Bonoy and husband Mikee.

Niana Guerrero rose to internet stardom when she started covering dance choreos with her older brother, Ranz Kyle, in his YouTube channel. She later launched her channel in 2013, her first upload being an adorable Gwiyomi cover back when she was still 7. As of today, she has garnered over 14.1 million subscribers, with a cumulative 1.2 billion views on the platform.

Watch Niana’s latest upload where she and her brother, Ranz, give away new shoes to strangers as an early pamasko (Christmas gift).

Actress-turned-vlogger Ivana Alawi crossover from television to being a YouTuber in 2019 and has become one of the most subscribed Filipino channels with 14.4 million subscribers. She has accumulated nearly one billion views and a large following on social media, including Facebook (18M followers), Instagram (7.3 million followers), and Twitter (4.6M followers). Check out her latest vlog below.

Ranz Kyle joined YouTube in 2008 but only began uploading videos of his dance covers in 2011. He was a member of boyband Chicsers in 2010 and received acting stints aside from attending television variety shows. In 2017, Ranz gained popularity on YouTube alongside her sister, Niana, for their incredible dance covers. Amassing over 14.6 million subscribers with cumulative views of nearly 1.6 billion, Ranz currently uploads vlogs and internet challenges, in addition to his dance covers. His duo with Niana has expanded to a trio, bringing their youngest sister, Natalia, into the picture. Like Niana, Ranz also recently uploaded a giving back-themed video on his channel. Check his POV below.

Is your favorite Filipino YouTuber on the list? Who do you think deserves to be in the Top 15? Let us know in the comments!

Also Check Out: 15 Most Followed Filipina Celebrities on Instagram 2021